Does Jazz Have a Future?

I just finished an article in The New York Times entitled “Blue Note Records at 80: Can a Symbol of Jazz’s Past Help Shape Its Future?,” written by Giovanni Russonello. The online version of this article gave no indication of who the author is or what credentials he brought to writing what turned out to be an impressively lengthy essay. Between my own personal listening experiences and the recordings I have accumulated, I came away with the impression that Russonello did not know that all much about what was going on half a century ago or what role Blue Note played in those activities. However, when it came to writing about those who currently call what they are doing “jazz,” his article turned out to be more informative; and I was glad I had taken the trouble to wade through the muddle of the author’s initial thoughts.

I suppose that my tolerance of Russonello and a lot to do with my grudging acceptance of living in a culture that is “ignorant of history and proud of that ignorance.” Mind you, there are any number of jazz performers here in the Bay Area that are well aware of the giants of the past and impressively capable of standing on the shoulders of those giants. For that matter, this has been the case in general for much of the past, certainly among those recording with Blue Note in its prime. Thelonious Monk had a prodigious appreciation of his predecessors; and his first recording session with Riverside consisted entirely of selections from Duke Ellington’s “book.” (Charles Mingus similarly admired Ellington, even if that admiration resulted in the notorious Money Jungle recording session, which, for the record, eventually found its way to a Blue Note recording.) 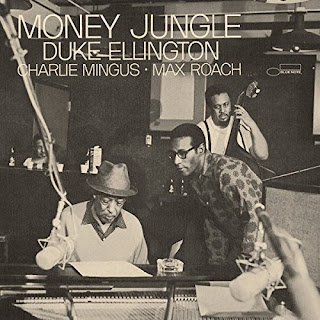 The cover of the Money Jungle album, showing Duke Ellington at the piano, Charles Mingus at his bass, and drummer Max Roach (from the Amazon.com Web page for the remastered release of the recording)

So it is not the performers that trouble me. My real concern is with the audiences and my belief that, however wedded to Internet sources everyone may be, earbuds and Internet connectivity will never be an adequate substitute for being in the presence of music being made in-the-moment by skilled musicians. Thus, I am less interested in all the names that Russonello drops at the end of the article in conjunction with recent Blue Note projects and more concerned about how many of those names have followers listening to them in “real-time” performance settings.

When I go over to the SFJAZZ Center, I occasionally encounter someone whose past experiences overlap my own; but, mostly, I find myself among people who happen to be there just because they happen to be there. (I also have to confess that I have had little satisfaction from my few encounters with what SFJAZZ purports to do in the name of “education.” I am all for education; but, to be blunt, those responsible for it at SFJAZZ strike me as having a lot to learn and showing few signs of being motivated to do so!)

The bottom line is that whatever it is that we choose to call “jazz” will only have a future if there are audience bases that allow it to do so. Going to places like the Red Poppy Art House (and, for that matter, Union Square during the summer) indicates that such audience bases can be found in San Francisco. From a more “mainstream” point of view, I have been impressed by what San Francisco Performances has done in offering jazz in a variety of different settings. Whether such efforts are sufficient to build audience interest and support to a “critical mass” remains to be seen. Nevertheless, when I see many of the results of efforts by both the San Francisco Symphony and the San Francisco Opera to strike a healthy balance between past and present, I feel as if I am in the right place to see if that critical mass will emerge.

Post Script: Tomorrow’s print edition of The New York Times will run another article by Russonello entitled “A History of Blue Note Records in 15 Albums.” (As the hyperlink indicates, this article is now available online.) I decided to see how many of those albums were in my collection (whose growth depended heavily of mailings I would receive announcing new Mosaic albums). Only four of Russonello’s selections are in my collection; but my own view of jazz does not give as much attention to the recent past as Russonello does! Indeed, four of the items on his list did not exist when I was building my collection.
Posted by Stephen Smoliar at 10:32 AM