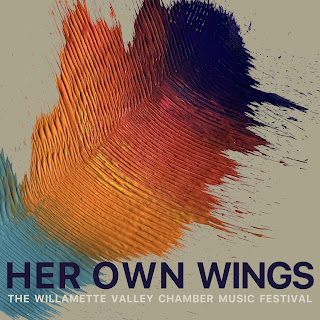 This coming Friday, Bright Shiny Things will release Her Own Wings, an album of two string quartets by Gabriela Lena Frank. These pieces were performed when Frank was composer-in-residence at the Willamette Valley Chamber Music Festival in Oregon. The album is the latest example of a recording whose presence has not yet been recognized by Amazon.com. [added 8/1, 10:25 a.m.: I keep forgetting that Amazon indexing almost always indexes only the content on the album cover. There is a Web page for this recording!] Fortunately, the Festival has its own Web site on Bandcamp, which includes a Web page for Her Own Wings. Since this is a streaming and download site, the approach to pre-ordering is slightly different. Oner of the tracks is available for preview by streaming. Any purchase prior to Friday will result in the opportunity to download that track, and the remaining tracks will be available after the release is “official.”

Frank is no stranger to the Bay Area. One of the two quartets on the new album is the string quartet version of the suite Leyendas: An Andean Walkabout, which the Del Sol String Quartet recorded for their Zia album, released by Sono Luminus in February of 2013. The piece is also in the repertoire of the Amaranth Quartet, which performed it in 2016 as part of its Music of Cultural Coexistence concert series. On this new album the Willamette performers are violinists Megumi Stohs Lewis and Sasha Callahan, violist Bradley Ottesen, and cellist Leo Eguchi.

Leyendas (legends) is preceded by the world premiere recording of Milagros (miracles). Callahan takes first chair with Greg Ewer on second violin. They are joined by Ottesen and Eguchi. Like Leyendas the more recent composition is also a suite of relatively short movements that reflect on the geography and culture of Peru, where Frank’s mother was born. Neither of these suites can be described as programmatic. Rather, they can be taken as personal reflections of the composer’s own sense of her Latinx heritage.

I have listened to enough of Frank’s music to appreciate (and enjoy) the role played by of rhythmic patterns in her rhetorical expressiveness. If the music amounts to self-examination of her cultural background, then it is through rhythm that she tends to make her points most effectively. The performances on this new album clearly appreciate the significance of rhythm, frequently colored by unconventional sonorities that never come across as gimmicky.

Ironically, my most recent encounter with her music came not long before the COVID lockdown, when her songs were included as part of the New Moon Duo recital presented by Old First Concerts at the end of February. Unless I am mistaken, this means that I have been able to listen to more of Frank’s music than I have experienced in many past seasons. This new album reminds me that her music deserves more frequent encounters through both performances and recordings.

Posted by Stephen Smoliar at 7:35 AM