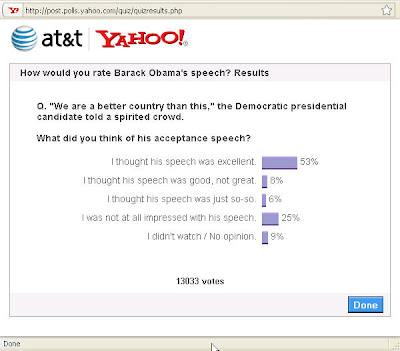 By way of disclaimer, I should begin by stating that I participated in the AT&T Yahoo! "poll" (scare quotes because any results from this exercise cannot seriously be taken as representative of anything) on the basis of having read the text of Barack Obama's speech, rather than viewing it on television or on my computer. As should be clear by now, I feel very strongly that text matters; so I really wanted to review this speech on the basis of its text, rather than Obama's performance or, for that matter, the performance of everyone else at Invesco Field reacting to Obama's performance. For the record my own vote in the poll was "excellent," although the adjective I preferred in talking to my wife after my reading was "solid." I was reminded of the other time I found myself paying close attention to Obama's words and the ways in which he could use his rhetoric to deliver substance rather than just to promote his personality. That other time, of course, was when he went on television to talk directly about the "race question." More specifically, I remember Jon Stewart's reaction to that speech, which became a point of departure for my own post:

Jon Stewart got it right last week. The most salient feature of Barack Obama's speech was his decision to address the American public as if they were adults.

In last night's speech this "adult approach" came down to a straightforward exposition of what needed to be done, concluding with one of the most important injunctions from the Reverend Martin Luther King, "We cannot walk alone." By concluding on a note of joint commitment and participation, Obama was able to convince me that, at least for now, he was not going to try to win the White House by playing up to that sense of Secular Messianism that had infected so many of his supporters, if not the "American way of life" in general. Having endured eight years of watching reality get trumped by faith at every move coming from our Executive Branch, I felt as if this was a candidate who recognized that any "recovery" of the "American promise," as he put it, must begin with a recovery of our sense of reality.

Of course, when Jon Stewart made his joke about Obama treating the American public as adults, the point of the joke was how different Obama was from everyone else, whether in politics or in the media covering politics. It is hard to act like an adult in a playground full of bullies, but differentiation may be what the electorate needs right now. The last two elections were close because too many voters could not see the difference between the two candidates and, as a result, did not particularly care which way they voted. There may be strength in Obama playing the differentiation card. It may mean that the people who vote for him actually know whom they are selecting and why they are selecting him. This value of differentiation takes me back to considering the AT&T Yahoo! poll.

If nothing else, I hope that all of my words have demonstrated the folly of trying to rate Obama's speech on a five-point scale. Nevertheless, one thing interested me about this snapshot that I took immediately after I bumped the sample space up to 13033 votes. Small as this sample space is, there is the suggestion of a bimodal distribution. Put another way, over three-quarters of the respondents felt strongly about Obama one way or the other; and I am hoping that this is a good sign. As Pierre Bourdieu put it in his Outline of a Theory of Practice:

There is nothing worse than to pass unnoticed ….

Without worrying about how many votes were positive and how many negative, there is at least an indication that, whatever feelings about Obama may be, he is not passing unnoticed; and I am hoping that this will constitute a change from the malaise of the last two elections in which it often felt as if neither candidate was being noticed very much. The question now is whether Obama will be noticed for walking alone or whether a critical mass of those who notice him will choose to walk with him.

Posted by Stephen Smoliar at 7:07 AM