Minding your own Business

Last September my printer/scanner was starting to give up the ghost. After doing some Internet-based research (just to reassure readers that I really don't want to throw my wooden shoes into the Internet infrastructure!), I concluded that I could get the best price for the product that best suited my needs through the Staples Web site. The product I selected was from Canon, and my decision was partially influenced by the availability of a manufacturer's rebate. I had dealt with such rebates before, so I knew that you had to jump through a lot of hoops to then wait for an inordinately long period of time. Nevertheless, I decided to initiate the process, more for the sake of observing it than for receiving the rebate, which was only $10. So I jumped through all of my hoops on or about September 25 (basically, the same day on which I registered the product).

On October 21 I received the following electronic mail from "canon@cs.rebatestatus.com:"

The Canon U.S.A, Inc. Rebate Center has completed processing your
submission for the following promotion:

You will receive an additional notification by mail. You may also access
your submission by contacting us at:

We appreciate your business. Thank you.

Please do not reply to this message. Because this message has been
automatically generated, your reply will not receive attention.

This was, to say the least, curious. I had provided the UPC, since that is always one of the requisite hoops; but it was the remaining reasons that got to me. Apparently, I had failed to provide a sales receipt; and the receipt I had provided was from a non-qualifying store! My attempt to point out these problems to Canon required my going through their Web site and yielded little more than another electronic mail message saying exactly the same thing. At this point I decided that it would be a good idea to send the mail trace to Staples, since I figured they ought to be informed that Canon had decided they were "a non-qualifying store." It took a bit of work to get the message through, but I had more luck communicating with Staples than I had sustained with Canon.

I figured this would be the rebate-less end of the story until I received the following in the mail: 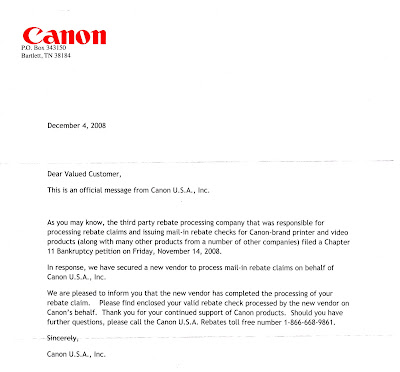 In the period since I had tried to point out the error in the rebate process to both Canon and Staples, "the third party rebate processing company" had filed for bankruptcy. It had not occurred to me that Canon would entrust financial incentives for better customer relations to a third party; but, in the world the Internet has made, it did not surprise me. Nevertheless, it made me wonder just where this outsourcing decision was made, which amounted to assigning such a critical element of customer satisfaction to a third party. Was this a decision that originated at corporate headquarters in Japan; or had it been made at the domestic level of Canon U.S.A., Inc.? The letter came from Bartlett, Tennessee, which is not the site of any of the Canon U.S.A. offices; so, presumably, the letter was sent by the new third party, "disguised" as mail from Canon U.S.A. itself. Was anyone in Japan aware of these activities?

Apparently, the scope of "remote mismanagement" extends further than I had assumed. However, this example raises a question I had not previously considered: To what extent is any corporation really responsible for minding its own business? If we can get to the answer to this question where silly little ten-buck rebates are concerned, we may arrive at a better understanding of the business-as-usual behind the economic crisis we are now suffering!

Posted by Stephen Smoliar at 10:23 AM