On December 10 I wrote up a narrative account of how Canon had bungled the rebate for a printer/scanner I had purchased through Staples and then resolved the problem, blaming the bungle on a third-party "processing company" and then providing the previously denied rebate check. At that time I expressed serious doubts that finding an alternative third party to process rebates would be much of an improvement. A letter I received today seems to support those doubts: 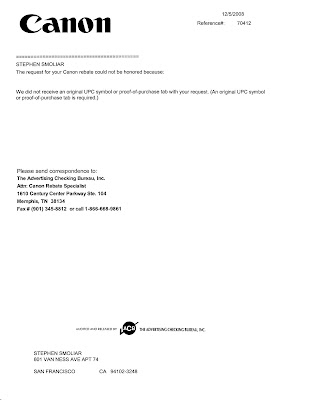 This letter was clearly automatically generated, rather than "written;" and, on the basis of my earlier account, it seems to have been generated from the faulty data records of which I had run afoul in the first place. Since I deposited my rebate check on the same day as I wrote my earlier post, this strikes me as a clear instance of history repeating itself as farce!

Posted by Stephen Smoliar at 3:57 PM