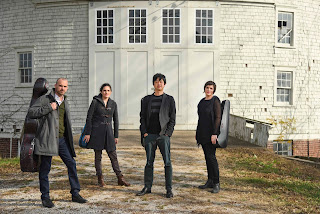 The Jupiter String Quartet is one of the more “familial” chamber ensembles. The violinists are Nelson Lee and Meg Freivogel. The violist is Liz Freivogel, Meg’s older sister; and the cellist is Daniel McDonough, Meg’s husband (making him Liz’s brother-in-law). The members were appointed as artists-in-residence and faculty members at the College of Fine & Applied Arts of the University of Illinois Urbana-Champagne in 2012. Since that time they have performed regularly on campus at the Krannert Center for the Performing Arts at Illinois and directed chamber music programming.

On the four successive Fridays of next month, the quartet will present a concert series entitled Reflection and Renewal. Each program will begin with a movement from a well-known string quartet from the nineteenth century. This will serve as a basis for comparison with a more recent composition; and, on one of the programs, it will also be contrasted with an earlier eighteenth-century work. All programs will last for at most half an hour and will be available for on-demand viewing beginning at 10 a.m. (Pacific Time) on the Friday of each week. Viewing opportunities will continue through March 5. The programs planned for each of the four weeks are as follows:

February 5: The nineteenth-century offering will be the final movement of Ludwig van Beethoven’s Opus 95 (“Serioso”) in F minor; and it will be followed by “Imprimatur” by Canadian composer Kati Agócs, currently teaching at the New England Conservatory of Music.

February 12: The program will begin with the second (theme and variations) movement from Franz Schubert’s D. 810 string quartet in D minor. This is known as the “Death and the Maiden” quartet, since the theme is taken from the D. 531 song setting the poem by Matthias Claudius of the same title. This will be followed by the final two movements of Michi Wiancko’s To Unpathed Waters, Undreamed Shores, “Follow the Water” and “Rise Up.”

February 19: The opening selection will be the first movement of Felix Mendelssohn’s final string quartet, Opus 80 in F minor. This will be coupled with the Largo cantabile e mesto movement from Joseph Haydn’s Hoboken III/79 quartet in D major. The program will then conclude with excerpts from Dan Visconti’s Ramshackle Songs.

February 26: Complementing the preceding program, the final offering will begin with the fourth movement of Mendelssohn’s first quartet, Opus 12 in E-flat major. This will be followed by George Walker’s first string quartet, entitled “Lyric for Strings” and written in memory of his grandmother on his mother’s side. The program will then conclude with one of the three rags the William Bolcom composed for string quartet, “Incineratorag.”

The Krannert Center has created a single Web page for the entire series. Graphic tokens have been created for each of the four programs. That token will provide the event link through which the concert may be viewed when on-demand viewing begins.

Posted by Stephen Smoliar at 3:09 PM No comments: