An Unintended Consequence of Literary Ignorance?

I just read a Business & Finance report on the Reuters wire that caught my attention for its literary implications:

Cerberus Capital Management has been swamped with redemption requests with the Wall Street Journal reporting that investors are asking to pull out $5.5 billion or 71 percent of assets from its hedge funds.

Cerberus last month tried to entice investors into staying with the firm, but found that its clients overwhelmingly wanted to leave, the newspaper reported.

My immediate reaction was to wonder whether these fund managers realized how much truth-in-advertising there was behind their decision to invoke the name of Cerberus. A quick visit to the Wikipedia entry for this name should have been enough to give them pause:

Cerberus, (pronounced /sər-b(ə-)rəs/[1]; Greek form: Κέρβερος, pronounced [kerberos][2]) in Greek and Roman mythology, is a multi-headed hound (usually three-headed[1][3][4]) which guards the gates of Hades, to prevent those who have crossed the river Styx from ever escaping.

This entry also includes a cute photograph of an ancient Roman statue depicting this beast: 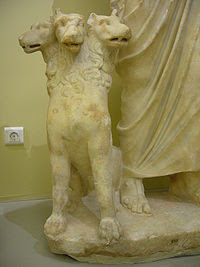 Later on in the entry, we encounter a prescient sentence that has all sorts of implications for the world of hedge fund investment:

Each of Cerberus' heads is said to have an appetite only for live meat and thus allow the spirits of the dead to freely enter the underworld, but allow none to leave.[12]

I have to wonder whether or not it was the prospect of an encounter with Cerberus that would later inspire the immortal words of Dante Alighieri:

Those certainly strike me as words to the wise where hedge fund investing is concerned these days. From a literary point of view, the name of this fund was just a fancy way of saying "Roach Motel for Investments!"

Posted by Stephen Smoliar at 2:47 PM