One Small Step for Technology; One Deep Dive for Literature

Chris Matyszczyk has made my day again with the latest post to his Technically Incorrect blog on the CNET Blog Network. Here is his latest news of the weird:

But Fred Berenson, a clearly fascinating research associate at New York University, has managed to gain sufficient funding to attempt a project that I feel sure none of you has contemplated.

For Berenson has decided to rewrite a veritable whale of a book, "Moby-Dick," entirely in emoticons.

This enterprising cove used Kickstarter to impress those who might have money to drown in such an eccentric quest.

He describes, with quite fetching enthusiasm, how he intends to turn all 6,438 sentences of the great Herman Melville opus into Japanese Emoji, rather picturesque emoticons that are on most handsets in Japan.

Fortunately, one can follow the hyperlink that Matyszczyk provided to get a feel for the results thus far; and, as is almost always the case, the Devil is in the details.

The example that Berenson provides covers roughly the first two-thirds of the first chapter: 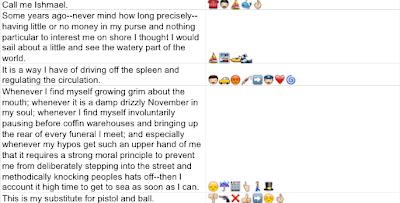 This immediately reminded me that I was old enough to experience the days when Mad Magazine was funny, since I detected a family resemblance to at least two of their better pieces. The more impressive was the parody of Readers' Digest that included a book condensation of Gone with the Wind that fit on two pages. The other was a bit they did on how Gary Cooper could have served as a translator for President Dwight Eisenhower (boy, does that date the article!), since Eisenhower's statement tended to be loquacious unto an extreme. Cooper translated everything he said into one of two sentences:

Going back to the examples themselves, I assumed that the gun icon was the "translation" of "pistol and ball;" but was the umbrella for "substitute?" More interesting to me, however, was where the demonstration ended. Consulting the source text, I discovered that the sentence following the last one being demonstrated was the following:

With a philosophical flourish Cato throws himself upon his sword; I quietly take to the ship.

My guess is that this sentence will be sufficient to blow the project out of the water with or without the arrival of further funding!

Posted by Stephen Smoliar at 11:52 AM