Not a Good Way to be Number One

Ill Fares the Land is the title of Tony Judt's newly published book. It is also the title of his essay (drawn from the first chapter of the book) in the latest issue of The New York Review. As one may guess from the choice of the words, neither is particularly cheerful; but ultimately Judt's concern is with diagnosis of the illness, rather than laying out its symptoms. From this point of view, however, he presents the symptoms in a way to achieve maximum impact, thus getting our attention when he turns his attention to diagnosis.

One particular graph demonstrates how much that impact is necessary: 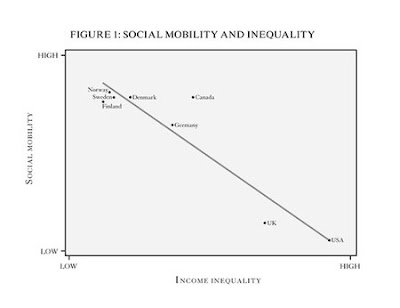 This demonstrates just how the United States stands above (if that it the right preposition) all other industrialized nations when it comes to potentials for advancement. Put another way, this graph illustrations just how much a fiction the Horatio Alger myth really is and who benefits from that fiction. The point is that it is virtually impossible for those of modest means to break into the ranks of the wealthy. The wealthy of the United States have created a social framework that protects them from such "invaders;" and, while the "class conscious" United Kingdom may be our nearest neighbor, the distance on the graph speaks for itself. Can there be a more compelling argument that the time for patience with the rich and mighty can no longer endure?

Posted by Stephen Smoliar at 9:52 AM