Last night in Old First Church, cellist Charles Curtis made his debut as a solo recitalist in the Old First Concerts series. As is often the case when a cellist performs without an accompanist, Johann Sebastian Bach provided the core for Curtis’ program; but Bach also served as a “gravitational center,” around whom composers from both a more distant past and a more distant future “orbited.” Curtis chose to represent both past and future by a pair of composers seldom encountered in recital programming. The past reached all the way back to the fourteenth century of Guillaume de Machaut and the sixteenth century of Silvestro Ganassi dal Fontego, while the future encompassed the “immediate present” with the first performance of Tashi Wada’s “Valence,” as well as a major twentieth-century composition by Luigi Dallapiccola.

The Bach selection was the BWV 1008 solo cello suite in D minor. Notwithstanding the opinions of Spinal Tap’s Nigel Tufnel, by the time Bach was a working musician D minor had assumed the relation of a “dark” key. However, since it is likely that Bach wrote his six solo cello suites for pedagogical purposes, it is likely that his only objective was to familiarize the pupil with the intervallic relations that characterize the key. Another pedagogical objective was to cultivate the pupil’s awareness of counterpoint even in a single melodic line. Curtis was particularly adept to sorting out the voices contributing to Bach’s contrapuntal fabric, often endowing different voices with different rhetorical stances. This was most evident in the concluding Gigue movement, in which the relationship among the voices seemed to have an almost mocking argumentative quality.

The earlier compositions were not written for cello. Indeed, the six Machaut selections were secular songs for which any instrumental presence was optional. Since these songs tended to consist of many verses, however, it was often the case that a melodic instrument might pick up the tune after one of those verses to give the singer a chance to catch his breath. Often, the instrumental contributions would involve a bit of improvisation; and, for one of last night’s selections, Curtis even added a second voice. Similarly, the Ganassi selections were four ricercars from one of the earliest instructional manuals for playing the viol, Regola Rubertina, which came complete with a cover illustration showing how to hold the instrument: 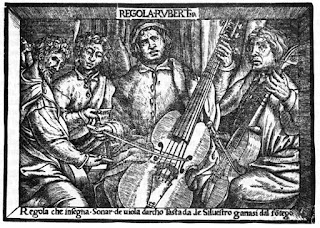 The ricercar was an early form of fantasia, often involving imitative counterpoint and going on for considerable duration in what may well have been an improvisatory style. Ganassi’s ricercars, on the other hand, seemed to be brief introductions into the different intervalic colorations associated with different major and minor keys.

As might be expected, the Wada premiere was “something completely different.” Nevertheless, it shared with music of earlier times an interest in the harmonic series; but Wada’s focus was almost entirely on upper harmonics that would have been beyond the imagination of the oldest masters, let alone the scope of the twelve chromatic pitches. As both a theorist and a performer, Wada has had a long-standing interest in alternative tuning systems; and in “Valence” he basically dispenses with any traditional idea of a gamut, choosing instead to explore stepwise motion through upper harmonics so tightly packed that the ear might mistake his music for glissando playing.

Under Curtis’ execution, however, the listener could readily identify all those pitches as distinct tones. This involved not only some highly precise finger work but also an acute sense of how bowing close to the bridge (sul ponticello) can mask out the fundamental and the more familiar lower harmonics. The result was that, were one not watching Curtis at work, one might almost confuse the sounds with those of analog oscillators or real-time software synthesis. The result was a thoroughly engaging exercise in listening, not differing significantly from the spirit of Bach’s suites, which could be just as pedagogical in familiarizing a third-party listener with different styles of performance as they could be for the student of the instrument itself.

Wada’s “Valence” was coupled with a solo cello Adagio movement. This was the concluding movement of a three-movement suite that Dallapiccola composed in 1945. (The preceding movements were a chaconne and an intermezzo.) Dallapiccola was an Italian composer, who took great interest in the twelve-tone grammatical framework that had been pioneered by Arnold Schoenberg. However, he had a particular rhetorical gift for eliciting lyric qualities from that grammatical foundation. This relatively short movement offered a perfect example of how expressive Dallapiccola could be; and Curtis has done well in championing this piece for “audience consumption.” Indeed, Curtis seems to be an eager advocate for just about any approach to making music. One seldom encounters such breadth of scope in a single recital, leaving one to hope that other performers will be inspired by the scope of Curtis’ ambition.
Posted by Stephen Smoliar at 7:41 AM