Watching the BBC World Service television news yesterday afternoon gave the impression that the delegates at the Republican National Convention were far more interested in hearing from their nominee for Vice President than they were in hearing their "official" standard bearer. This made for an interesting contrast with the Democratic National Convention, where, for quite some time, it seemed as if the most important speech would be the one delivered by Hillary Clinton (followed, in importance, by the speech given by her husband). This should be a lesson in premature judgment. Even the preparations for Barack Obama's acceptance speech turned out to be grounds for criticism. However, once he started to speak, there was no doubt about who was leading the fight to reclaim the White House; and there was a performance whose merits were acknowledged even by his opponent. So, as I have tried to argue in evaluating the situation in Iraq, pundits would do well to refrain from reviewing the opera before the fat lady has even come on the stage!

Nevertheless, now that the text of Sarah Palin's speech is a matter of public record, it is probably worth asking whether it was worth the fuss, both in terms of content and in terms of that excuse for a "poll" that AT&T Yahoo! has decided to conduct again. What the "official story" does not provide, however, is an account of who actually authored that content. Speechwriters are rarely called out by name. We know they are there. West Wing junkies probably even think they have some idea of how they work. However, in this case Associated Press writers Tom Raum and Liz Sidoti saw fit to credit the source of the text, because they felt it was relevant to their account of how the Democrats reacted to it:

The Obama campaign had less than a warm greeting, saying Palin's speech was "written by George Bush's speechwriter and sounds exactly like the same divisive, partisan attacks we've heard from George Bush for the last eight years." The speech was written by Matthew Scully, who met Palin for the first time last week.

For all my carping about whether Associated Press has decided to substitute "writing" for "reporting," I think that Raum and Sidoti were justified in including this paragraph in their story. As I tried to argue previously, the most important thing about Hillary's Convention speech was how personal it was; and, if that personalization was a product of a skilled delivery of the well-honed craft of one or more crack speechwriters, then that "question of attribution" is still secondary. Whether or not this was a case of George Burns' "faked sincerity" was less important than how well that speech "played from the heart," so to speak. One could almost say that Hillary set the bar for Obama's own speech; and Obama demonstrated that he could play from the heart just as powerfully, even when digging into the nuts and bolts of the agenda he wanted to bring to the White House. Alas, the same cannot be said of Palin's performance.

The problem, which goes back to the Democrats' reaction, is that there was more of a sense of evident manipulation, rather than sincerity (real or fake). It was all about pushing the right buttons at the right time. To judge from the Raum-Sidoti account, all the buttons were pushed at the right time; and they all delivered the appropriate responses. In other words it was pretty much a run-of-the-mill convention speech, which is actually saying something for the content. After all, those buttons were basically rhetorical frosting on a cake that was little more than a resume delivered as a personal recitation. This is not to disapprove of the cake: It was probably as good a way as any to establish Palin, once and for all, as an accredited "known commodity;" it was just not the stuff of what many of us are thinking as we stare into the abyss of an uncertain future (while, I might add, Dick Cheney is busy digging away at that abyss to make it even deeper).

Indeed, notwithstanding what the Vice President may have been doing while Palin was delivering her address, Scully made at least one move that tipped the Republican hand in a way that reminded us of that abyss:

The right reason is to challenge the status quo, to serve the common good, and to leave this nation better than we found it.

This was nostalgia at its most counterproductive, looking back at when Ronald Reagan stood beside Jimmy Carter and asked the American electorate, "Are you better off now than you were four years ago?" Reagan and his team knew the answer, and they knew they could win an election based on that answer. Would any Republican run seriously today on the proposition that things are better now than they were in November of 2000? How would those who are still victims of 9/11 answer? What about those who suffered consequences of the more inept decisions arising from our adventurism in the name of the Global War on Terror? What about those who will not even vote, those in countries on every continent who used to view the United States as a governmental model? That second quoted sentence is a time bomb, and it can only blow up in the face of the party whose Administration got us into the mess in which we are now mired.

Nevertheless, there remains the question of whether or not at AT&T Yahoo! poll has anything useful to say. 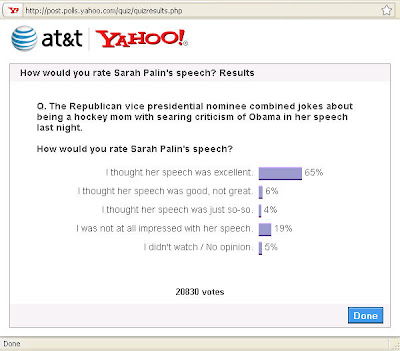 The first thing I noticed in the above snapshot, which I took immediately after casting my (negative) vote), is that far more people responded. My guess is that this had to do with how little was known about Palin. The number give no indication of audience size; but it may suggest that more people were prompted to form and voice an opinion on the basis of this one speech (as opposed to the extensive coverage given to previous Obama speeches). Again, there was very little middle ground; and this is probably a good thing, since I continue to feel that differentiation is going to matter significantly where both political parties are concerned. If Palin's difference is currently larger than Obama's was, then that may have more to do with novelty than with content (or it may be a sign that, as BBC News has suggested, the Democrats have more work set out for them than they had anticipated). How important will this speech be in the longer run of the entire campaign? At the very least we should put that question aside until the final scene of this week's opera!
Posted by Stephen Smoliar at 6:51 AM