The Economy: Promises and Data

Did John McCain know that the Labor Department would release their unemployment statistics the morning after (how appropriate) his Convention speech? If so, then that may have explained why he tried to put at bit more substance into at least two of his paragraphs:

I know some of you have been left behind in the changing economy and it often seems your government hasn't even noticed. Government assistance for unemployed workers was designed for the economy of the 1950s. That's going to change on my watch. My opponent promises to bring back old jobs by wishing away the global economy. We're going to help workers who've lost a job that won't come back, find a new one that won't go away.

We will prepare them for the jobs of today. We will use our community colleges to help train people for new opportunities in their communities. For workers in industries that have been hard hit, we'll help make up part of the difference in wages between their old job and a temporary, lower paid one while they receive retraining that will help them find secure new employment at a decent wage.

Notwithstanding the debate over his proposed solution (retraining only works when there are slots for the retrained to fill, which is not necessarily the case, particularly when those slots cost less by being outsourced overseas), "left behind" hardly does justice to the Labor Department numbers. Glenn Somerville's report for Reuters provided us with a graphic that speaks far more forcefully than any of McCain's rhetoric: 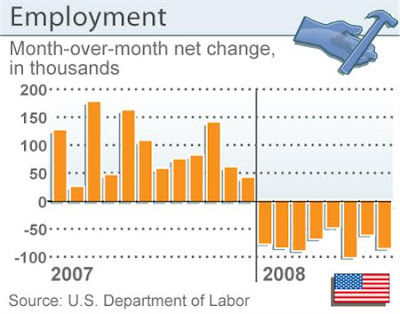 This leaves us with Somerville's words, which simply underscore how bad things are:

The U.S. unemployment rate unexpectedly shot up to 6.1 percent in August, the highest in nearly five years, as employers cut payrolls for an eighth straight month and a decline in labor markets accelerated.

The Labor Department said on Friday 84,000 jobs were lost in August, significantly more than the 75,000 that economists surveyed by Reuters had forecast. In addition, July's job losses were revised up to 60,000 and June's to 100,000 from a previously reported 51,000 in each month.

Analysts said the bleak hiring data showed a weakening economy that likely will oblige the Federal Reserve to keep interest rates low for an extended period.

"The economy is clearly deteriorating," said Gary Thayer, senior economist for Wachovia Securities in St. Louis. "We're also seeing weakness around the globe so there's less reason for the Fed to focus on inflation and more reason to focus on getting the economy back on its feet."

Stock indexes futures extended losses but U.S. Treasury debt prices rose as investors bet it meant interest rates will remain in hold. The dollar dipped in value against other major currencies and short-term interest rate futures began to signal that the Fed could cut interest rates by year-end.

Labor department officials said the August jobless rate was the highest since September 2003. Analysts had expected the rate to remain steady at July's 5.7 percent rate rather than to jump.

"We're running job losses that are typically seen in the early stages of an economic recession," said David Resler, chief economist for Nomura Securities in New York, adding, "we're probably in one."

There were steep cuts in hiring in nearly every major category of employment. Some 61,000 manufacturing jobs were lost in August, the most for any month since mid 2003, and 8,000 more construction jobs were cut. There were 53,000 jobs eliminated in professional and business services and 4,000 in leisure and hospitality industries.

At least McCain knew that he had to invoke the economy for more than a stick for cudgeling the opposition (as his running mate had done the previous evening); but is he ready to admit that he is up to his arm pits in alligators? If Pit Bull Palin is attacking Barack Obama by distorting his tax plan, Obama is at least recognizing that the status quo will no longer serve us and that McCain's departure from that status quo is more rhetorical than substantive. The thing about those alligators, though, is that you need more than a plan for draining the swamp. You need to capability to implement that plan; and, like it or not, the status quo of our whole political system could well bring down either approach. This is why Obama keeps stressing the theme that we all have to work together to make things better; otherwise, we shall all end up as alligator food.