The Poll after the Final Debate

While I continue to be skeptical about the AT&T Yahoo! polling process, I also continue to take an interest in whether any useful information may be mined from their arbitrarily collected data points. For example, I try to examine the results at the same time of day to get some idea of the comparative size of the number of participants. This may be the most interesting aspect of the most recent poll over who "won" the final debate between Presidential candidates John McCain and Barack Obama: 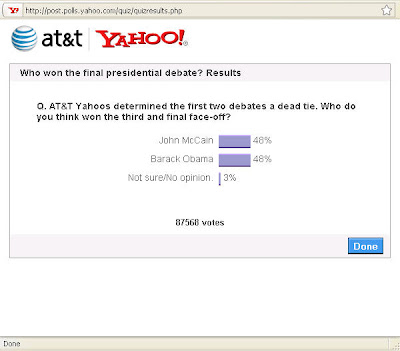 As of my participation and examination of the results, 87,568 votes had been collected. That is, by far, the largest participation number since I started "polling these polls." Second place is held by the number responding to Sarah Palin's acceptance speech at the Republican National Convention; but, with a count examined at the same time of day of 20,830, that is a considerably distant second. It is interesting, however, that, when I examined those results, I remarked on how many people had responded. If we were thus to use the raw participation numbers as an indicator of interest, regardless of what the responses themselves were, that large number may be interpreted as predicting a very strong turnout on Election Day. Given the pathetically low turnout ratio for past elections, this, in itself, may be a good sign.

This takes us to the results themselves: 3% making no choice and the remainder perfectly evenly divided between the two candidates (with round-off lurking somewhere among those three numbers). At the very least, this should lead us to question some of those recent "double-digit" leads given to Obama on the basis of more "scientific" (scare quotes meaning sanctioned by the community of professional practitioners) polling methods. I am not saying that AT&T Yahoo! is providing a more representative sample; I am just saying that the significant difference between their numbers and the "professional" numbers should raise questions. Did what happened in the final debate have such a significant effect on that 10% of the electorate that was giving Obama his advantage; and, if that is the case, did those 10% have some common sore nerve that Obama happened to touch, perhaps inadvertently (or, to be fair, did McCain find some way to give them just the strokes they craved)? Is it possible that the advantage, itself, was in error (or, worse, had been "cooked" by using a particularly conducive methodology)? My personal feeling is that, as was the case with the previous debates (and the AT&T Yahoo! poll results), neither candidate gained an advantage; and perhaps that is all that these particular numbers are saying. Put another way, the 87,568 participants may just have said that this debate had no impact on how they would vote in November.

The real problem may be that the media has tried to present each debate as a prizefight, while the electorate, fully aware of the many messes they now have to confront, wants nothing more than a clear and reliable information resource. Since the media continue to represent that "American Ruling Class," rather than the lion's share of the electorate itself, it is not really in their best interests to serve any general public quest for information that will be useful on Election Day. So perhaps the statistical tie of these results does little more than validate the proposition that all three debates failed to provide viewers with that clear and reliable information resource. In retrospect this should not be surprising. Those viewers already know that television advertising is a representative sample of how little useful formation the television medium provides. They just let it be known that the debates made as little difference to their final decision as all that campaign advertising, which could be perceived by anyone familiar with television as a few grains of signal dissolving into an ocean of noise.

Posted by Stephen Smoliar at 6:49 AM