Are There "Dangerous Hazards" to Description?

This morning I found myself dwelling on the claim I made yesterday that "impediments to effective description are dangerous hazards, rather than petty annoyances," wondering whether I was inflating the significance of that "challenge of description" because it happened to be the problem that was occupying so much of my own time. However, I think that the reason why I am putting so much time into this problem is that, as I progress through Philippe Hamon's Du Descriptif, I realize that his extended essay is long on examples and short on theory. Now one reason for this difficulty may be that, as Hamon observes, we spend a lot of our time engaged in description; so asking anyone to come up with a theory of description is a bit like that cliché of asking a fish to come up with a theory of water. Description is so deeply embedded in our communicative actions (not just our writing, let alone any "literary" writing) that it is difficult to reflect on either its process or its product (the two sides of the coin that anthropologist Pierre Bourdieu insists be given equal treatment). From a more positive point of view, however, it may be that description is the "degree zero" (to appropriate the language of Roland Barthes) of communication, a "ground level," so to speak, from which we must then face the sorts of foundational problems about communication itself that have occupied social theorists like Jürgen Habermas. As Hamon emphasizes, even the deictic act of pointing at something may be regarded as description, from which we may wish to suggest that, if description is the "degree zero" of communication, then deixis is probably the "ground zero" of description. To put this in less academic language, if we can understand the role that pointing plays in our descriptive actions, then we may better understand how description "works" in our communicative actions. However, this raises a secondary problem: If my own focus is on the description of time-dependent phenomena, such as performances of music, do we "point" when we communicate about those performances; and, if so, how do we do it?

The problem with this latter question is that the very nature of pointing presumes an object in space (although that object may change with the passage of time). The way I have tried to deal with this problem in the past has been to introduce some object in space that can mediate between the agent trying to do the pointing and the actual time-dependent phenomenon at which the agent is trying to point. An example of such a mediating object in space is the sort of graphic display of a function of time that I have applied to my efforts to communicate (descriptively) about a performance of Ludwig van Beethoven's Opus 109 piano sonata. For convenience, here is a reproduction of the image I have used in the past:

This image is not only an object in space but also static, which further facilitates any pointing I may choose to do "through" it. I should also observe that, in some of my past research in computer-supported piano pedagogy, I have explored a variety of other approaches to such graphic displays, some of which are actually based on the music notation in the score being performed. Thus, if there is a need to point at that "ground zero" level of description, there is a good chance that the need can be satisfied through some mediating object in space that may even have the convenience feature of being static.

If there is such a need, however, why does it arise; how does pointing serve description? One possible answer is that we often point in the interest of comparison, trying to establish that some "this" is either very much like or very much different from some other "that." Thus, the above display represents a single recorded performance of the third movement of Beethoven's Opus 109. However, in a pedagogical setting, a teacher may wish to achieve a means by which the student comes to understand (in the sense of Habermas' theory of communicative action) how a recording of the student's performance differs from that of the teacher's performance (or, in the spirit of the Pablo Casals example that Bernard Greenhouse cited, the range of differences across several performances by the teacher). (Pointing would thus serve to achieve the goal of finding what Marvin Minsky, in his Society of Mind book, called "the difference that makes a difference.")

Another service that pointing may provide is that of reference to some other object or set of objects. Thus, the above image also provides a time-line that corresponds to the time-line of the recorded performance itself. One may thus associate a particular instance of high amplitude with the "clock time" at which it occurs, following a clock display while listening to the performance. In his earlier work on such displays, Robert Cogan would annotate the display with specific markers, which would indicate specific measure numbers or, for example, the beginning of the recapitulation section of the movement. Here is an earlier image that I prepared that included such annotations: 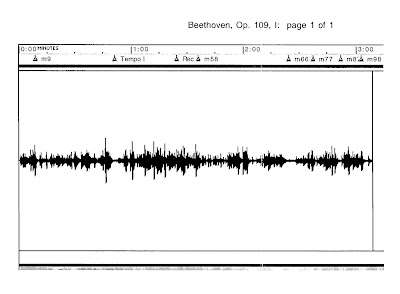 Thus, rather than comparing one performance to another, we use the display to associate features in the display with other features that we may wish to engage in the description we are trying to formulate. This means that there are at least two ways in which deixis contributes to the act of understanding a descriptive communicative action, but what is there to that communicative action beyond the contributions provided by appropriate acts of pointing?

Once again, I shall try dealing with this question by posing another question: What is it that makes description so foundational in the overall field of communicative action? I do not think we can fall back on the proposition that descriptive action is more objective than other communicative actions. Description can only be based on the subjectivity of the describing individual's capacity for perception. However, there may be some benefit in approaching this problem in terms of the "interfaces" that exist between objective, subjective, and social worlds. For example, one way to approach the study of phenomenology, particularly as someone like Edmund Husserl chose to pursue it, is in terms of the relations between the objective "signals" detected by sensory organs and the subjective "perceptions" arising in the consciousness of the perceiving individual. Communication, on the other hand, involves relations among the subjectivities of many individuals through behavior in the social world (as in George Herbert Mead's approach to "social behaviorism"). Thus, whatever those subjectivities may be, communication can only begin if we are capable of describing them; and that is what makes description the "ground zero" of communication.

Let me offer an example that comes not from my experience with listening to music but from my reading of Sigmund Freud's The Interpretation of Dreams. When we awake from a dream, we are in an extremely personal "subjective state." If we try to reflect on that state (which we usually do), we try to relate it to the dream. In order to do this, we have to reconstruct the dream (which fits in nicely with Hamon's approach to characterizing description as a rewriting process, reconstructing in words something that exists in the physical world); and Freud calls the result of that reconstruction the "dream-work." This is important because, ultimately, he cannot analyze the dream itself but only our reconstruction of it, which is basically how the patient comes to describe the dream to the analyst. I often prefer to go so far as to drop the "re-" prefix. The "dream" may be nothing more than random neural activity that provokes the mind to construct some narrative, which then serves as the descriptive "dream-work" presented to the analyst. My point is that this approach to the "extreme subjectivity" of dreams may serve as a model for how, when we communicate in social settings, we deal with the rest of our subjective world. We deal with it through description, because that is the only "currency" we can exchange in the social world.

I shall now propose the speculative leap that we deal with the experiences of listening to music the same way in which we deal with our dreams. Listening to music shares with the dream world that same "extreme subjectivity;" but, where music is involved, we are less concerned with the analysis of our psyches and only interested in how we socialize with others by sharing our listening experiences. Furthermore, there may be little difference between the sort of socialization that takes place in the pedagogical settings of learning to be a better performer of music and the socializing that takes place among friends as they leave an auditorium in which they have experienced a musical performance. The critical word in that last sentence, however, is that "may." Perhaps my next step should be to look into whether or not there some Minsky-like "difference that makes a difference" between those two respective settings of dreams and listening to music!

Posted by Stephen Smoliar at 10:21 AM