Beyond the Soup Kitchen

Bailout Bill probably does not have the resources of Denny's; but, in the spirit of Denny's revival of the Depression-era soup kitchen, he is attracting a line of people in need. Here is how Sima Kotecha explained the situation for the Newsbeat feature of the BBC:

Imagine getting £35 for doing absolutely nothing. Well in New York, a man is giving away stacks of cash to anyone who's prepared to stand in line for it.

The mystery man, who calls himself 'Bailout Bill', says in the middle of an economic crisis ordinary Americans who are struggling to make ends meet deserve a bailout.

In order to get the money people have to go the 'Bailout Booth' in the heart of Manhattan's Times Square.

It's a small cubicle, a couple of blocks away from the massive Virgin Megastore.

No matter who you are or what you do Bailout Bill guarantees that you'll get something if you just show up and tell your story.

Hundreds have already braved the freezing temperatures to get their free dosh. Some have stood in line for hours before getting to the front.

The Web site version of this story also includes a photograph of the line: 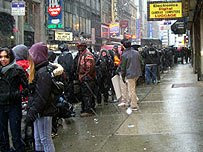 This photograph may not become as memorable as the image I provided to supplement the Denny's story, but it seems just as representative. It certainly gives an indication of those elements that need to be "braved."

It seems like only yesterday (actually last Thanksgiving) that I was trying to frame our understanding of the economic crisis through the principles of Slavoj Žižek:

Reading through all of this frustration, I was reminded of Slovenian philosopher Slavoj Žižek's recent observation that we no longer have an adequate socio-political narrative to address questions as fundamental as our justification for being or how we choose what to do. Where this economic crisis is concerned, however, the quest for a narrative (such as has been explored by the economist Deirdre McCloskey) may be too ambitious. Perhaps we just need to home in on a good solid metaphor.

Well, circumstances seem to be unfolding a narrative for us. Unfortunately, it is a narrative of the Great Depression, which I suspect that just about anyone in a position of power is trying to treat as a "narrative that dare not speak its name." Those folks will engage the full power of their analytical weapons to keep the word "depression" out of the public vocabulary; but they cannot keep its narrative from unfolding on the streets, whether those streets are in front of a Denny's or in the middle of Times Square. Once again we may be at the mercy of an addiction. This time it is an addiction to theories that are out of touch with practice. The "narratives on the street" can provide the first step of a "twelve-step program" by owning up to the addiction itself. That loss of a sense of reality is not confined to the elite domain of the World Economic Forum, and it is time for our leadership to recover that sense, even if they have to go out on the streets to do so!

Posted by Stephen Smoliar at 9:23 AM

Wonkette may know her Ten Commandments, but there is more to this story in the rest of Exodus. The first violation of the second commandment was the worship of the Golden Calf while Moses was up on Mount Sinai taking notes. I would say that there is far more than a "family resemblance" between the Golden Calf and the Wall Street bull, even if the latter is only made of bronze!