During the Opera Insight Panel, which preceded the opening night for The Ring of the Nibelung at the San Francisco Opera, mezzo-soprano Elizabeth Bishop was probably right to call out Stephanie Blythe as a game-changer where the interpretation of the role of Fricka is concerned.  From my point of view, Blythe was almost certainly my major reason for regretting missing the Seattle Opera Ring in the summer of 2009.  What seems to have impressed most of the critics was the way in which she brought new dramatic intensity to the first scene of the second act of Die Walküre, transforming an episode that many have dismissed as tedious to the point of deserving a bit (or more) of cutting.  Anna Russell fans know that she reduced the episode as “Mr & Mrs Wotan have an argument;”  but Blythe won praise for “reinventing” the scene into a battle of wits over sexual politics.  Bishop’s point was that, through this interpretation, Fricka was transformed from nagging prig (which, as I have suggested, may well have been what Richard Wagner wanted her to be) to feminist champion.
Now, I certainly do not want to detract from Blythe’s contribution to performance tradition.  I believe that every role should be taken seriously by the performer executing that role;  and Fricka’s character definitely needed some consciousness-raising.  However, the vocal repertoire provides plenty of opportunities for a mezzo to establish herself as a formidable sexual force to be taken seriously.  Carmen and Delilah are probably the roles that make this case with the greatest strength;  and, while it may seem odd to fold Carmen and Fricka into a single sentence, I came to that sentence while trying to pull together background material for the rerelease of the Ring performance arranged by Wilhelm Furtwängler for the opera’s first radio broadcast as a cycle in 1953 from the studios of Radio Italiana.
This performance actually had two Frickas, one for Rheingold (Ira Malaniuk) and one for Walküre (Elsa Cavelti).  I found myself drawn to Cavelti’s performance with the same attention I had given Bishop last week and to Blythe in 2009.  Within the constraints of a radio broadcast (and possibly with the benefit of Furtwängler’s coaching), she definitely knew how to take the role seriously and make her seriousness believable.  In my efforts to learn more about her, I came across a photograph, which would have to have been of her interpretation of Carmen: 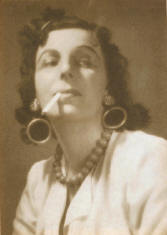 That was enough to establish a link in my personal mental model of opera.  I would not suggest that she played Fricka as Carmen, just that she found an infrastructure of strength of character that supported both of these roles.  Isn’t strength of character what matters most in the execution of any operatic role?
Posted by Stephen Smoliar at 9:13 AM