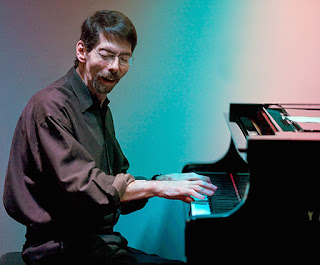 This Friday Palmetto Records will release a new recording entitled Sunday Night at the Vanguard, for which Amazon is currently taking pre-orders. The title refers to a session at the Village Vanguard in New York that took place this past March 27 featuring jazz pianist Fred Hersch leading a trio whose other members were John Hébert on bass and Eric McPherson on drums. Hersch has been a frequent visitor to my home town of San Francisco, most often appearing in concerts organized by San Francisco Performances (SFP), the most recent of which took place about a month before the recorded Vanguard session and presented the same trio.

One has to be careful in applying the adjective “cerebral” to jazz. Many think of the bad old days of the Third Stream movement, when Gunther Schuller tried to build a bridge between his experiences with some of the most adventurous composers of the twentieth century, particularly those coming up to speed following the Second World War, with his hands-on experiences of playing in equally adventurous jazz combos. (Schuller played French horn at the March 9, 1950 recording session for Birth of the Cool for the tracks that included the standard “Darn That Dream,” Miles Davis’ “Deception,” and Gerry Mulligan’s “Rocker.”) Others think of the introspective intensity that can be found in the recordings of pianists such as Thelonious Monk, Bill Evans, and Cecil Taylor.

Hersch does not fall into either of these categories. However, he shares with pianists like Monk, Evans, and Taylor a keen sense of focused attention to every note he draws from his keyboard. He is not shy about taking familiar tropes from the bebop era as points of departure, but he never seems to have trouble conveying them in new directions. Thus, as I discovered at his last SFP gig, it is very difficult to listen to Hersch in performance without sitting on the edge of your seat, hanging on every phrase trying to figure out where he will next take his melodic lines. That may be the key to his cerebrations: Hersch approaches his keyboard as a pianist well-versed in counterpoint. Thus, he can let his bass player worry about establishing any sense of harmonic progression while he allows his melodic lines to superimpose and interleave in any number of imaginative ways.

The result is that none of the tracks on this album allow for what we might call “casual” listening. Even when the tune is as familiar as Richard Rodgers’ “A Cockeyed Optimist,” Hersch cooks up a rhetoric that is as remote from the pablum of a Broadway show tune as was John Coltrane’s take on “My Favorite Things.” Furthermore, even if we know that Sunday Night at the Vanguard is a “produced recording,” the attentive listeners among us can still reconstruct some feeling of the spontaneity of the session that had been captured for reproduction. The virtue of this album resides less in its “documentation” of a club date than in the extent to which the attentive listener can begin to imagine having been there at the Vanguard marveling at the in-the-moment immediacy of it all.
Posted by Stephen Smoliar at 12:53 PM