My Own Private Reality

I had not anticipated that my presenting Jimmy Wales with a Chutzpah of the Week award would attract very much attention. (The truth is that I am surprised when anything I write attracts attention!) However, by concentrating on Wikipedia as the focus for his chutzpah, I overlooked the Wikia part of the talk that he gave on Tuesday at ad:tech San Francisco. I must admit that, before that talk, I was not particularly familiar with the Wikia effort; and I am still not sure what to make of it. Here is the brief summary that introduces the Wikia entry on Wikipedia:

Wikia targets communities, both those established offline and those with a purely online following. Wikia is free of charge for readers and editors and licenses user-provided text content under the GNU Free Documentation License or, in the case of Memory Alpha and Uncyclopedia, a Creative Commons license (CC by-nc-sa). The wiki software used is MediaWiki.

Wikia was founded by Jimmy Wales and Angela Beesley, respectively the Chairman Emeritus and Advisory Board chair of the Wikimedia Foundation.

This entry also cites the slogan of Wikia as being, "Creating Communities," although while listening to Wales talk about this service, I found myself thinking about another slogan that had been introduced by Huey Long, "Every man a king." Consider how Long elaborated on that slogan:

Every man a king, so there would be no such thing as a man or woman who did not have the necessities of life, who would not be dependent upon the whims and caprices and ipsi dixit of the financial martyrs for a living.

Giving this speech in 1934, the "martyrs" Long had in mind were those financial elites who had been hit hard by the Great Depression and who were now subjecting the more general population to their "whims and caprices" in the interest of economic recovery, a context that certainly rings familiar again today. However, the elites that Wales has in mind are those concerned with publication, his position appearing to be that anyone should be free to publish anything with little (if any) regard to the extent that publication has established itself as a profession with a strong foundation of normative practices (which Wales may want to dismiss as "whims and caprices").

What sort of "anything" does Wales have in mind? One answer to this question can be found, again, in the Wikipedia entry for Wikia:

Wikia covers a broad range of topics; almost any project is accepted, with the exception of ideas that compete with the Wikimedia Foundation's projects, which Wikia's founders are heavily involved in.[12] In comparison with Wikipedia, Wikia hosts specialized wikis that offer more detailed or comprehensive content. Because Wikia is not an encyclopedia, subjects not qualifying for inclusion on Wikipedia due to lack of notability may be accepted on the respective Wikia wiki. For example, a minor character in a Star Wars film may have its own article on Wookieepedia, but only a brief mention on Wikipedia.[13]

Lest we dismiss that last sentence as whimsy for the amusement of the reader, it is worth considering the example that Wales gave to the ad:tech audience. He began by projecting the image of the Wikipedia page for Genghis Khan as an example of what one expects from an encyclopedia. He then proceeded to riff about a great battle in which Genghis Khan, Alexander the Great, and Napoleon were all combatants. It turns out that this battle took place in the world of Marvel Comics, and he promoted Wikia as the venue where anyone could learn about that battle.

Quite honestly, I was not quite sure what to make of this as an example. I have a great interest in mythology, particularly when it comes to the roles that myths have played in our efforts to make sense of the real world. However, I also have a clear sense of the difference between literal and figurative language, which usually establishes the boundary that separates myth from reality. In its effort to cover "a broad range of topics," is Wikia providing every man his own reality through some bizarre extrapolation of Long's vision?

I decided that one way to pursue this question would be to initiate a Google search on the phrase "Genghis Kahn" and the keywords "Alexander" and "Napoleon." Here are the first five hits: 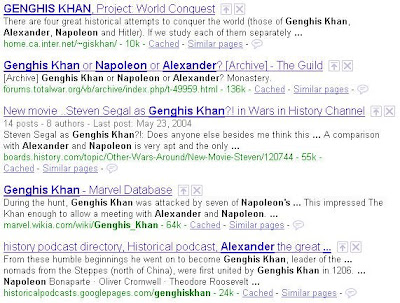 The first two seem well enough grounded in reality. The third drifts into questions of casting for a movie, and the fourth brings us to the Marvel Comics Wikia site. We then return to the more humble world of a historical lecture delivered as a podcast. Presumably we can assume that anyone reading the excerpts provided with the search results will know that the Marvel site is concerned with fiction, but can we really make that assumption? Given some of the examples of writing I have recently encountered, I am not as confident in making that assumption as I would like to be!

My point is that there is much that can be gained from exploring questions grounded in the domain of fiction, as long as we recognize where that grounding resides. Having emerged from eight years of national policy grounded in faith-based thinking, I have become very sensitive about separating the world of fiction from the world of reality. I therefore worry that the technologies of Google and Wikia may be blurring the boundary that establishes that separation. This may not be the sort of cognitive impairment that Nicholas Carr had in mind when he posed the question "Is Google Making Us Stupid?;" but it still emerges as the basis for difficulty in everyday problems of getting on in the real world. I can imagine some who might argue that Google should start to sort their results to separate the worlds of fiction and reality; but such a separation requires a level of understanding based on semantics, rather than "lexical repertoire." When it comes to semantics, the technologies available to us may be promising but far from up to such a subtle task. The best course of action is to be more thoughtful in how we use our Internet-based tools; but Carr's point is that we may be losing our capacity for such thoughtfulness by virtue of relying on those tools. We should think about his claim … if we still have the capability and will to do so.

Posted by Stephen Smoliar at 7:57 AM