Giving the Software Too Much Control

Consider the following image, just snapped from my ATT.NET home page on Yahoo!: 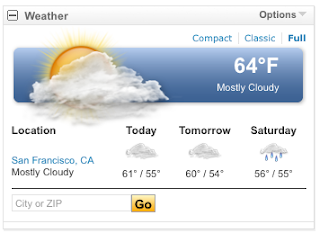 Compare what it says about the current temperature with today’s forecast high.  The obvious question arises:  When was that forecast formulated, and why is it still in place in the face of contrary data?  (For the record, when I look out the window, I see the sun shining on everything in sight.  I see clouds in the sky, but I figure that this would count for “partly” rather than “mostly” cloudy!)  Clearly, the forecast was generated by software (isn’t everything these days?);  but should not software, particularly software put out there as a public service, be subject to that same injunction that Juvenal proposed for any “authority figure” (bearing in mind that he assumed such figures would be human):  “Quis custodiet ipsos custodes?”  One would think that such sanity checking would be second nature in any large enterprise that depends on software development expertise;  but maybe this is one of those data points that warrants the sorts of things that the doom-sayers are proclaiming about Yahoo! these days.  After all, can you trust any source that is easily contradicted by looking out the window?
Posted by Stephen Smoliar at 9:58 AM