Is ISIS a Product of the Failed Arab Spring?

I can appreciate the decision of the author of "The Mystery of ISIS," scheduled for the next issue of The New York Review of Books and currently available on their Web site, to remain anonymous. The article is rich with both historical background and analysis, yet it never draws any conclusions as to why ISIS should be recruiting so many followers on such a broad international scale. I would like to suggest that the author may have overlooked the role that may have been played by the Arab Spring, not so much in terms of any immediate impact that happened, fizzled, or backfired but with regard to the motivating forces behind protest. Those forces had so much in common that, as I observed in August of 2011, they could be found in Israel as well as its many Arab neighbors.

The writer that seems to have been most aware of those forces was Fareed Zakaria, whose analysis on the Time.com Web site argued that those who gathered in Tahrir Square were there because, regardless of how much education or training they had, they could not see a future for themselves in Egypt as it was in early 2011. Indeed, such a social context would suggest that the Arab Spring inspired not only Israeli youth but also the subsequent Occupy movement. Perhaps the most important consequence of globalization is that, practically everywhere in the world, there is now a generation of educated young people who see absolutely no prospects for a viable future. That future has been withheld from them by the tyrannical forces of an "economic elite," the top 1% of the tope 1%, if you will, that understands the world only in terms of balance sheets and returns on investment.

In any individual country this would be a desperate situation. On a global scale it is an invitation to catastrophe. Through skillful manipulation of the "consciousness industry," surpassing that of both the Nazis and the economic elite, ISIS has been able to circulate its message to those who feel, rightfully so, that there is nothing they can do to bring any satisfaction into their lives. Moralists can wax indignantly that ISIS should try to deceive so many vulnerable individuals, but do they give any thought as to why those individuals were so vulnerable in the first place?

Think about it. Through globalization the economic elite has create a world in which even the basic premises behind governance have gone onto the rocks, smashed by the domination of marketing over legislation and jurisprudence. "Rational man" may be justified in declaring that the efforts of ISIS to burn down the whole house and replace it with their caliphate are "barbaric;" but are they any more barbaric than they ways in which the "wise men [sic] of Davos" have all but obliterated the middle class in any economic society? The world may ultimately be divided between those who waste away out of their own helplessness and those who rally to ISIS for the simple reason that they have nothing better to do with themselves.
Posted by Stephen Smoliar at 9:12 AM No comments:

Back when I was living in Los Angeles, it was a good place to be for those interested in exploring the diversity of single malt whisky varieties from Scotland. The city seemed to have a critical mass of Japanese businessmen residing there, and their interest in some of the really special products of Scotch distilleries may well have surpassed their interest in vintage wines. These days China has become the new Japan, and the action is in China itself rather than in any of the American cities. One result has been the formation of the Single Malt Club in China (SMCC) to "take over" the connoisseurship of the best of the brews from Scotland.

Going the Japanese (at least) one better, SMCC has created its own investment fund of three million pounds Sterling. The purpose of the fund is to promote interest in single malts, buying them in quantity for distribution in China, and (presumably) benefiting from the results of the sales. The launch of the fund was announced by First Minister of Scotland Nicola Sturgeon, who is currently leading a trade mission in China.

Profit motive aside (although I am sure it is never very far aside), it is nice to see an investment fund that will benefit one of the few bodies of small businesses that produces something other than toys for the idle rich!
Posted by Stephen Smoliar at 8:00 AM No comments:

Trump on the Web

At the bottom of one of the news Web pages I was reading, I saw the following: 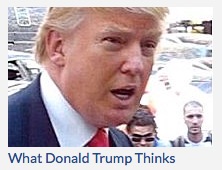 I later realized that I had to scroll to read the second line of this headline:

I decided I liked the first impression better. I wondered whether the URL would take me to a blank page or whether the risk would be too great that I would run afoul of malware. I opted for the latter possibility.

Posted by Stephen Smoliar at 1:22 PM No comments:

The latest bad news from Detroit is that Harley-Davidson is recalling 185,000 motorcycles made in 2014 and 2015. The problem is that the saddlebag can come loose and fall off of the bike. It is unclear how many times Harley has issued such a recall, but my guess is that there have not been many. It would not surprise me if Harley had a better manufacturing record than Cadillac. So this may be yet another case of skilled labor just not being what it used to be, at least where quality control is concerned.

On the other hand, Harley detected the problem through analysis of warranty claims. This is definitely good news. Because, apparently, there have been no reports of crashes or injuries due to this defect. In other words, unlike some of the automobile companies (and not just the American ones), the folks at Harley believe in closing the barn door before the horse has been stolen (and then filing their own insurance claim on the stolen horse). Harley seems to be a company that still believes that the customer is more important than the shareholder.

The fact is that the company had a rough past, particularly when Japanese bikes were on the rise. However, they managed to rise above that mess. One reason is that many of their customers are "true believers." Apparently, they want to make sure that they believe in their customers as strongly as their customers believe in them. How many Chief Executive Officers of publicly-traded corporations can make that claim with a straight face? (Harley does not always keep a straight face, by the way. Their ticker code on the New York Stock Exchange is HOG!)
Posted by Stephen Smoliar at 4:35 PM No comments:

To put the situation is as blunt language as possible, if you build hobby drones so easy to use that any idiot can fly them, who do you think will be your biggest customer base? As BBC News reported early this morning, it looks like, when it comes to the current massive fire in San Bernadino County, such customers are taking a really bad situation and making it even worse. As one report on the fire (quoted by the BBC) put it, those drones"pose a major safety threat to firefighting pilots and firefighters." The result documented in this report was that helicopters that were supposed to be providing water drops had to stay grounded until the drones were out of their path of approach and drop. This matter is being investigated, but it smacks of our new mindless generation thinking only of attracting attention with YouTube uploads, rather than of the real priority of first containing the massive fire and then extinguishing it. Even Peter George (the author of the book on which the Dr. Strangelove movie was based) could not have dreamed up such idiocy for his fiction,;and now we have to contend with it in the real world.
Posted by Stephen Smoliar at 9:18 AM No comments:

Depending on Defective Software

My recent "Confluence of 'Glitches'" piece suggested that the sorts of systems failures that have recently plagued institutions as large as United Airlines and the New York Stock Exchange may be traced back to a major nosedive in what, when I was both teaching and research computer science, used to be called "software quality." Indeed, it has been so long since I have encountered that phrase that I have to wonder whether or not it still has any currency in current software engineering practices. The fact is that our day-to-day life is more and more dependent on software embedded in the devices and systems that we now use heavily. This is no longer a question of OS X software not being as good as it used to be. Within the last 48 hours I had an encounter with a security guard dealing with screen freeze on his cell phone. I have a Blu-ray player that keeps telling me to wait while it upgrades its software; and even after that "improvement" it still freezes on some Blu-ray discs. Comcast recently decided to implement a "smarter" HDMI interface, which has now been upgraded to make it worse than it was when I first used an HDMI connector. To add insult to injury, OS X Firefox can no longer display Blogspot pages with the utility bar at the top of the screen!

Recently, the Business section of the San Francisco Chronicle ran a story about the rise of "coding boot camps" in the Bay Area. This was a corporate-based response to the observation that coding talent is not what it used to be. Still, there is it worth asking just what sort of training those boot camps are providing? Could it be that software has gone down the tubes due to a competitive environment in which fast delivery is more important than product reliability? (After all, Microsoft conditioned us to expect that all software needs periodic updating.) Is this a sign of just how badly we are at the mercy of technology that no longer works according to plan?
Posted by Stephen Smoliar at 8:10 AM No comments:

A Confluence of "Glitches?"

It is not often that I agree with the FBI, particularly after Director James Comey's fumbling Congressional testimony on why his agency should have access to all encrypted communications. However, his response to three major computer outages (United Airlines, the New York Stock Exchange, and The Wall Street Journal) taking place all on the same day was the right one. Those who investigate criminal acts cannot afford to be "big believers in coincidence."

Indeed, this may be one of those cases in which investigators have to exercise the full scope of imagination to come up with a wide variety of qualitatively different hypotheses. One should be able then to assess systematically each hypothesis. Some will be easy to eliminate, while others will require more intense scrutiny and investigation. (The very question, "What will it take to refute this hypothesis?" can be a valuable driver for deciding the directions investigation should take.)

Even the hypothesis that this was, indeed, a confluence of accidents needs to compete with the other hypotheses. The point is that confluence is not necessarily a matter of coincidence. In this case, for example, it may simply be the result of the general decline in software quality, regardless of the particularly function being served by the software. In other words things went south for United Airlines, the New York Stock Exchange, and The Wall Street Journal for the same reason that they keep going south for OS X with increasing frequency.
Posted by Stephen Smoliar at 7:03 AM No comments: