Stravinsky Moves From Balanchine to Possokhov

On the advice of a friend, who had joined me this past Wednesday for the opening night of the last of the three next@90 programs currently being presented by the San Francisco Ballet (SFB), I spent part of this morning watching the Dance in America video of the New York City Ballet performing George Balanchine’s “Stravinsky Violin Concerto.” The high point of the SFB evening was the final selection on the program, Yuri Possokhov’s “Violin Concerto,” which he described as bringing “fresh eyes” to choreographing Stravinsky’s concerto. Watching the Balanchine version, I quickly realized how much work must have gone into Possokhov’s achievement; but I also realized that each version had its own distinctive merits. 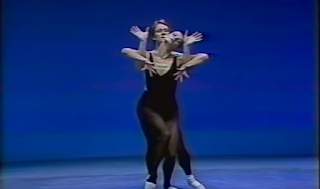 In Balanchine’s case many of those merits were retrospective. In my early days of writing about his choreography, I provoked both friends and colleagues with my observations of that choreographer’s interest in semaphore signals. I never meant this to be pejorative. Many of Balanchine’s “abstract” ballets owe much to a keen sense of geometry, and semaphore signals can be taken as a physical realization of basic geometric patterns.

However, there is much more to “Stravinsky Violin Concerto” than nods to semaphore signals, explicit or implicit. Of much greater importance is the wit that Balanchine brought to so many of the works he created. In a ballet like “Apollo,” that wit is low-key and worthy of a sly chuckle or two. On the other hand there is “Rubies,” the second of the three Jewels ballets.

Last Wednesday I offered that ballet as a source of “some of Balanchine’s sassiest moves;” but, truth be told (as they say), Balanchine was never shy about letting his sassiness get raucous. In that context “Stravinsky Violin Concerto” can be seen as a successor to “Rubies,” taking that “rhetoric of raucousness” to the next level. When I watched the Dance in America video, my laughs were loud enough that my wife in the next room wanted to know what I was doing.

In the War Memorial Opera House, on the other hand, I did not hear any laughter or even concealed snickers. Yes, there was, as I wrote on Wednesday, “ample room for belly laughs;” but the prevailing spirit in the house was not inclined in that direction. Furthermore, in my side-by-side viewing, I would say that Possokhov was inclined to a more subtle sense of humor, while Balanchine like to tickle the funny-bone by packing both classical tradition and show-biz hoofing into the same body. (“Rubies” is best interpreted as a crew of Vegas hoofers that happened to have blundered their way into a classical ballet company.)

Those that have not yet seen the third next@90 program and plan to do so might consider clicking that Dance in America hyperlink before going to the Opera House.

Posted by Stephen Smoliar at 10:49 AM No comments: