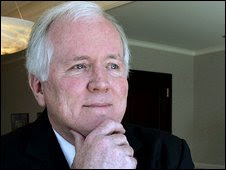 Would you buy a used insurance policy from this man? For those who do not recognize the face, he is Edward Liddy, Chief Executive Officer (CEO) of the American International Group (AIG); and today he will be in Washington facing members of Congress who will most likely provide faithful representation of the "tidal wave of rage" of American voters over his company's business practices. Needless to say, he will begin by delivering a prepared statement, which can be previewed on the BBC NEWS Web site:

The chief executive of AIG has admitted that fundamental mistakes were made at the US insurance giant.

"Mistakes were made at AIG on a scale that few could have imagined possible," Edward Liddy will tell a Congressional hearing later on Wednesday.

He will also admit that AIG is "too complex, too unwieldy and too opaque".

Mr Liddy also calls the $165m (£119m) bonuses paid by AIG "distasteful" after the insurer took about $170bn of aid from the US government.

In a prepared testimony, Mr Liddy says the company "strayed from its core competencies in the insurance business".

Nowhere was this more evident than in "the creation of what grew to become an internal hedge fund, which then became substantially overexposed to market risk," he adds.

He also addresses the contentious issue of excessive bonuses.

"I am mindful of the outrage of the American public and of the president's call for a more restrained compensation system," he says.

Mr Liddy said that he would never have approved the $165m bonuses if he had been chief executive at the time the contracts were signed.

"It was distasteful to have to make these payments," he says.

Since Liddy only became CEO last September, I am not surprised to see that he plans to fall back on a not-on-my-watch defense. More to the point, however, is whether it had occurred to him that, in a time of crisis for so many businesses in the financial sector, it would make some sense to do some "due diligence investigation" of what he might face in his new job. Had that been the case, such "due diligence" would have benefited from a conversation with Robert J. Arvanitis as serious as the one Joe Nocera had conducted in preparing his recent Talking Business column for The New York Times. I am thinking particularly of the internal view of AIG business practices, of which, as I documented in my own recent analysis, Arvanitis said, "they never thought of it as abuse."

I got a sampling of some of the wrath that Liddy is likely to face by watching a bit of C-SPAN yesterday. As a matter of fact, the specific wrath I encountered was a Republican suggestion that it might be a good idea to let AIG fail after all. So much for "the party of big business" (although it is a nice reminder that laissez-faire has a dark side, too)! My guess is that Congressional decorum will prevail over preparing any tar and feathers and then riding Liddy out of town on a rail; but I would hope that Liddy is smart enough to realize that heartfelt apologies are not going to get him very far (particularly among any who doubt that he has a heart at all).

The real benefit of having the text of his prepared statement is that those who will question him will have a point of departure for more productive conversation. I, for one, want to hear someone ask, "The buck now stops at your desk; what are you doing to clean up the mess, even if that mess happens to be inherited?" As we used to say in the Sixties, if Liddy cannot make a clear case that he is part of the solution, then he is just another part of the problem. Perhaps a faint whiff of boiling tar in the Committee Chambers might help inspire him to shift from apologies to productive proposals!

Posted by Stephen Smoliar at 8:09 AM