Those who have begun to read my contributions to SF Concerts Examiner may have noticed that I have now referred to two San Francisco Conservatory students by name: Hye Yeong Min for her participation in a Schubertiad program arranged by Paul Hersh and Madison Emery Smith for her Graduate Recital, as well as her promotion of that recital. I have written about the practice of identifying students by name, most recently a little less than a year ago when a review of the San Francisco Conservatory of Music production of Francesco Cavalli's L'Egisto on San Francisco Classical Voice "provoked a controversial exchange of comments over whether student performers should be reviewed (or, for that matter, named)." I still feel strongly enough about my original position that I shall take the liberty of repeating it:


Regular readers may have noticed a tendency on my part to refer by name only to professional musicians, as opposed to students, such as those at the San Francisco Conservatory of Music, or adult amateurs. This may be a reflection on my personal experience. One of things I remember about being a student, particularly a graduate student, was the way in which it seemed to grant me the ability to experiment "from a safe place." Education is very much a matter of exploration, and one cannot be a successful explorer by going down paths that have already been beaten smooth. Forging a new path, however, always carries an element of risk; and in the "real world" some of those risks could entail dire changes in the rest of your life if they are not approached with considered caution.

In other words an educational institution affords the opportunity to protect its students from the risk of serious consequences while encouraging them to be adventurous at the same time. As I see it, this idea of the "safe place" can be applied to just about any area a student wishes to pursue.
If I still believe this precept, why have I violated it twice before getting even half-way through this month? Smith was my first step down this slippery slope; and I took the step because initially I was writing about her effort to promote her recital, rather than about the recital itself. In the past I had seen single sheets of paper, possibly enhanced with a photograph, tacked up on a bulletin board; but I had never encountered as striking an announcement as the color post card Smith was circulating: 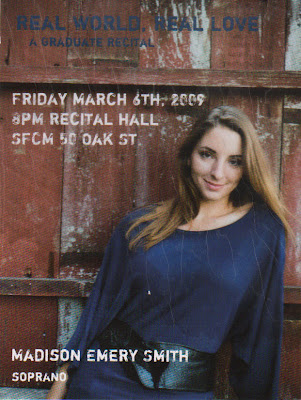 Having written about Smith's initiative as a publicist, it felt a little silly to write about the recital being publicized without mentioning her by name.
I shall also invoke the "silly" plea where Min is concerned. She was the only student participating in Hersh's Schubertiad. She was thus keeping company with two faculty members and one alumna, who was now running her own music school. Because the Schubertiad has traditionally been as much a social occasion as a musical one, it seemed appropriate to give the names and "credentials" of those occupying the "virtual drawing-room," thus casting the whole affair in a somewhat Proustian frame. If I had felt that Min's performance was out of place in her participation, I probably would have passed over any "roll call" in silence. However, this was Hersh's "drawing-room;" and she was one of the "friends" invited for the occasion. As I made clear in my review, she was definitely "up to" that occasion.
I am hoping that my effort to explain myself will provide some sort of "retaining mechanism" that will protect me from descending further down my slippery slope. I have observed that several Conservatory students now arrange to give performances beyond the protecting walls of the Conservatory. Out there in the "real world," people they do not know may be committing time and/or money to hear them perform. In that setting they have left the "safe place." I can write about them the same way I write about the performers I hear at Davies Symphony Hall; and, by all rights, I should write about them that way.
Posted by Stephen Smoliar at 12:38 PM