Fear and Loathing at the Gasoline Pump

Chris Baltimore has prepared a Reuters article about the http://www.terrorfreeoil.org/ Web site. Anyone interested in content analysis should fine this site an interesting visit. Consider their declared objective:

Terror-Free Oil Initiative is dedicated to encouraging Americans to buy gasoline that originated from countries that do not export or finance terrorism.

We are also looking into creating a healthy debate concerning alternate methods of fuel production and consumption.

Consider then what their home page says about this objective. Begin with their logo, which could not have been a better design to cultivate fear and loathing of Islam: 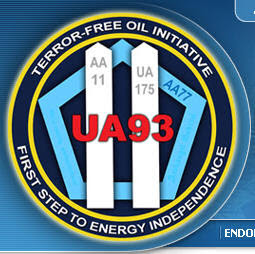 Then let your eyes wander over to the video you can watch on this page and make note of its title: "Terror-Free Oil: Saudi Arabia is NOT Our Friend!" (complete with rhetorical flourishes in the setting of the text). The name of the game is fear and the use of fear to instigate intolerance and discrimination, all cloaked by the pretense of "healthy debate" over our new quest for energy independence. Fortunately, Baltimore explores the whole goal of energy independence with an eye to whether or not it may be a "fiction of convenience" that serves no purpose other than political advantage, taking his cue from one of the energy think tanks:

"If we mean it literally, we're almost certainly headed for great disappointment," Daniel Yergin, chairman of Cambridge Energy Research Associates, told a congressional hearing, though he admitted the idea has "deep political resonance."

There is no doubt that "a healthy debate concerning alternate methods of fuel production and consumption" is valuable; but there is no value in starting that debate with inflammatory rhetoric!

Posted by Stephen Smoliar at 2:33 PM