The Latest Attack on Symbolism

Last spring I wrote about a lecture I had given during which I joked about George W. Bush's inability to interpret a semiotic sign in any reading other than the most literal one, probably as an ironic corollary of all of his readings being faith-based. To illustrate my point, I showed the following political cartoon, which cleverly demonstrated how our President's "semiotically challenged" condition was shared with Muslim fundamentalists, who had reacted so violently to the image of Mohammed in a Danish political cartoon (political cartoonists always being at their best in defending other political cartoonists): 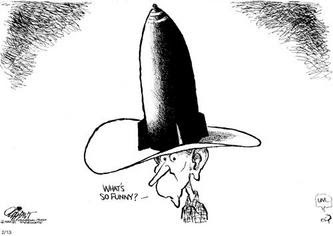 Sadly, this morning I discovered, in an item on the BBC NEWS Web site, that an exaggerated sense of political correctness may be just as detrimental to bread-and-butter semiotic thinking as faith is. The case at hand concerns the pending release by Miramax Films of the cinematic adaptation of the novel Blindness by Jose Saramago, described in the BBC report as the story of "a town hit by a sudden epidemic of sight loss resulting in a collapse of social order." As an indication of just how people tend to read these days, the BBC felt it necessary to explain that this novel was not really about blindness:

Saramago's 1995 book was praised for its use of blindness as a metaphor for the lack of clear communication and respect for human dignity in modern society.

Nevertheless, the National Federation of the Blind (NFB) has announced "plans to protest against the film at 75 cinemas in at least 21 US states when it is released on 3 October." NFB President Marc Mauer was quoted as saying:

The movie portrays blind people as monsters and I believe it to be a lie.

The NFB condemns and deplores this film, which will do substantial harm to the blind of America and the world.

Blind people in this film are portrayed as incompetent, filthy, vicious, and depraved. They are unable to do even the simplest things like dressing, bathing, and finding the bathroom.

The truth is that blind people regularly do all of the same things that sighted people do.

Now it would be easy enough to ask Mauer, by way of a rejoinder, "What part of 'metaphor' don't you understand?" However, if Mauer has been successful enough to rise to the level of President of the NFB, what are we to expect of those who pay to see this film? If President Bush cannot accept the simple literary premise that communication is not always literal but can also be metaphorical, perhaps there will be a "critical mass" of viewers who "read" this film as a literal portrayal of the blind. Perhaps Saramago will find himself in the thick of a breakdown in communication that goes far beyond the point he was trying to make through his fiction, where the epidemic we really face is one (most likely induced by the ways in which we are manipulated by the media) in which all meanings are only literal; and metaphor is no longer allowed a proper place, even in the stories we tell.

Posted by Stephen Smoliar at 9:15 AM