"This line looks like those pictures of soup kitchen lines during the Depression." 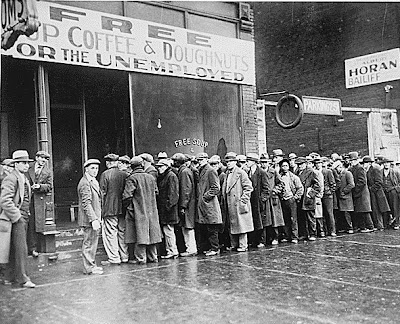 To the extent that our culture has any understanding of history at all, that understanding tends to be grounded in images. The above photograph of a long line of people waiting to pass through a door, above which a sign reads "Free Soup Coffee & Doughnuts for the Unemployed," has become one of the iconic images of the Great Depression. This photograph is included as part of the History section of the Social Security Online Web site, where it is given the following caption:

During the Great Depression preceding the passage of the Social Security Act, "soup kitchens" provided the only meals some unemployed Americans had. This particular soup kitchen was sponsored by the Chicago gangster Al Capone.

For one day, at least, the spirit of Al Capone was revived by the Denny's chain of restaurants, although I doubt that he could have fathomed the scale of the event, let alone how the word was propagated. Covering the Bay Area side of this story for the San Francisco Chronicle, Steve Rubenstein provided the following background:

The promotion was promulgated the way many monumental events are decreed these days, via a Super Bowl commercial. By Tuesday morning, the word had spread like hotcakes. In downtown San Francisco, the line stretched from the front door on Mission Street, between Fourth and Fifth streets, to the corner of Fourth and up the block.

Nearby merchants complained. Three cops stood by. The restaurant manager ordered that a new line should be formed in the Jessie Street alley, and people in the second line thought they were in the first line, and a lot of frustrated people got more scrambled than their eggs.

Rather than soup, coffee, and doughnuts, Denny's gave away their Grand Slam breakfast of bacon and eggs. Coffee was not part of the deal (which upset some); but water was provided to everyone. Rubenstein quoted one of the men in line who caught the historical connection:

This line looks like those pictures of soup kitchen lines during the Depression.

Rubenstein also tried to account for the full scale of Denny's effort:

The South Carolina-based restaurant chain said it figured it might wind up giving away as many as 2 million meals at its 1,541 restaurants nationwide. There were lines reported in the snow in Pennsylvania and in early morning hours in Buffalo, N.Y., where the low temperature was 23 degrees.

Once again it seems appropriate to borrow shamelessly from Georges Clemenceau. The last time I did this was when I wrote "that my own health is too serious to be entrusted to a Health Maintenance Organization or any of the other similar institutions currently in place." This time the variation would argue that the economic crisis is far to serious to be entrusted to economists, particularly those sitting in comfortable chairs in climate-controlled offices from which they can leave for about an hour and go off to a satisfying lunch. It is all very well and good to track market indicators, currency exchange rates, and a host of complex formulas; but none of those provide an economic indicator as tangible and painful as those 2 million people lined up in 1,541 Denny's restaurants, many sustaining the impact of winter at its worst.

Posted by Stephen Smoliar at 7:26 AM