I wanted to include both the photograph and the caption that preceded John Simpson's BBC report on the Tiananmen vigil held in Hong Kong: 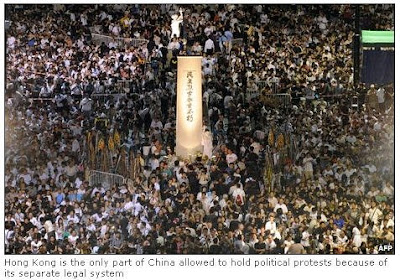 Compared with all of my other examples of attempts to either lock out or just deny reality, the efforts of the Chinese government to "erase the memory" of what happened in Tiananmen Square twenty years ago probably deserves some award for absurdity (but not chutzpah because it was far too predictable to be outrageous). However, the video coverage did far more justice to the event than this one photograph can muster. Suffice it to say that, according to Simpson, 150,000 people gathered in Hong Kong to recognize the memory that cannot be erased the way one can delete a file from a disk. The rest of us should remember the effort to keep this memory alive.

Posted by Stephen Smoliar at 6:00 PM