Firesong Returns to C4NM with a Featured Composer

Last night soprano Vanessa Langer returned to the Center for New Music (C4NM) with the latest incarnation of her Firesong ensemble. This is basically a chamber music group whose personnel vary to accommodate the theme of the program. This time the personnel included sound artist David Coll, who was also the featured composer. Allegra Chapman was the pianist, accompanying Langer and, in one selection, flutist Elizabeth Talbert.

The title of the program was The Refuse Project; and it featured a “partial premiere” of Coll’s current composition project, “Refuse Collection.” “Refuse Collection” is also the title of a eight-verse poem by Jeremy Prynne. The poem was written in 2004 in response to the news report, first released by CBS News, of practices of torture and prisoner abuse at Abu Ghraib prison in Iraq. The text is a stream-of-consciousness flow that almost seems to deny the possibility of meaning. Every now and then a fragment of description of Abu Ghraib practices leaks out but is immediately overtaken by the dominating babble of “verbal refuse.” The result emerges as an intense representation of the futile efforts to purge any knowledge of those horrors from memory.

Coll scored his setting for soprano and piano. Ultimately, however, performance resided almost entirely with Langer’s delivery of the text. The fact is that Prynne’s masterful management of his words so dominates attention that one barely notices that the words have been set to music. The result is that the piano part serves almost as a backcloth, while the vocal line is basically there to negotiate the depictions of frustrations through the twists and turns of the text. Thus far only two of Prynne’s verses have been set, but the impact left me wondering whether a sustained delivery of the entire text would be endurable. 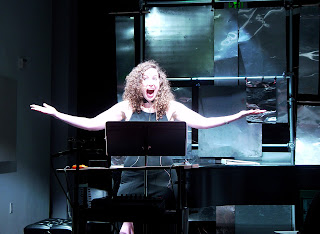 The text was in French, taken from a speech given by President Charles de Gaulle in response to the civil unrest in May of 1968, which involved uprisings and protests by both workers and students. De Gaulle was foolish enough to believe that his very presence would restore calm, and the fragments of text that Coll selected quickly made it clear how mistaken de Gaulle was. Langer was positively chilling in channeling the delivery of those words as the sounds from Coll’s structure undermined any effort to establish confidence in the speaker.

Coll created this piece in 2007. At that time it could have been taken as a cautionary reminder of how much authority depends on words. George Orwell had made his point dramatically in his 1984 novel, but Coll managed to tap into how to deliver the same message through music. Listening to that same music today, it is hard to avoid thinking about the currently authority structure of our own government and of the verbal techniques that support that structure. In Stalinist Russia the creators and performers of a piece like “Position, influence” would not have lasted very long. Coll’s music deserves a wider audience; but drawing too much attention to “Position, influence” could well bring about its undoing.

The major work on the program was George Crumb’s 1979 song cycle Apparition. Crumb took Walt Whitman’s long (206 lines) poem “When Lilacs Last in the Dooryard Bloom’d,” written in memory of the assassination of Abraham Lincoln, and extracted six fragments, setting each as an “elegiac song” (Crumb’s description). He then interleaved three wordless vocalise sections among those songs. The result was scored for soprano and amplified piano, the latter played both from the keyboard and from strumming and striking the interior.

Crumb had clearly extracted his texts with great sensitivity to the intensity of the words, and that intensity was more than effectively realized through Langer’s delivery. Chapman’s accompaniment was structured as much around raw sonorities as it was in Crumb’s demanding phrase structures of his pitch classes, and her command of all that Crumb required was never anything less than awesome. However, the most impressive skill probably went into Langer’s presentation of the vocalise sections, much of which involved bird calls. It is not hard to imagine that Crumb had decided to do for the vocalist what had occupied so much of Olivier Messiaen’s instrumental music.

Indeed, Langer chose to precede Apparition with two of the songs (the second and tenth) from Messiaen’s twelve-song cycle Harawi. The title refers to a genre of Andean vocal music that usually ends with the death of two lovers; and the cycle is one of three pieces that Messiaen composed based on the love-death myth of Tristan and Iseult. However, the music also reflected on the death of Messiaen’s mother (three years prior to his having composed the piece) and the mental illness that had been overtaking his first wife, Claire Delbos.

The structure of the two songs Langer selected complemented the vocalise work that would follow in her Crumb performance. In Harawi it is the piano that realizes the sonorities of bird calls, while the voice transcends the worldly qualities of those animal calls with an almost chant-like delivery of Messiaen’s texts. Here, again, Chapman had to contend with prodigious demands on her technique; but she was particularly effective in capturing the rhythms of the bird calls as “commentary” on Langer’s serene delivery of Messiaen’s words.

The avian qualities of Messiaen and Crumb were then sharply contrasted by Takashi Toshimatsu’s Digital Bird Suite, which he scored for flute and piano. The composer conceived this piece as excerpts “from fictitious music for a fictitious ballet, the hero of which is a mechanical bird named Digital Bird.” As might be guessed, the flute assumes the role of the protagonist in a score that, once again, addresses qualities of bird calls. However, the flute part makes it clear that this is not a “natural” bird; and Talbert’s technique was right up there with both Langer’s vocalise talents and Chapman’s interpretation of Messiaen. As might be guessed, this particular selection was more tongue-in-cheek; and both Talbert and Chapman found just the right touch to make the delivery both absorbing and appealing.
Posted by Stephen Smoliar at 7:43 AM

Good description of an amazing little concert. Glad I was there to see it too.