Lavay Smith at Biscuits and Blues 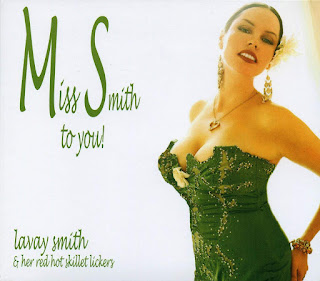 Lavay Smith on her latest album cover (from its Amazon.com Web page)

For as long as I can remember walking by Biscuits and Blues, on the northwest corner of Mason Street and Geary Boulevard, I can remember seeing announcements of forthcoming performances by Lavay Smith & Her Red Hot Skillet Lickers. (To be more accurate, my first awareness of Biscuits and Blues took place almost exactly 23 years ago, when, for the first time, I was living in the Bay Area, having moved to Palo Alto from Singapore.) It did not take long for me to learn who Smith was and what kind of music she made; and my “first contact” with her, in the Miner Auditorium of the SFJAZZ Center, was not the best of experiences. However, that had more to do with the physical and acoustic problems of the space, rather than the performers; and last night I finally compensated for those defects by going to Biscuits and Blues to experience the music in a more conducive environment. To make a long story short, I was not disappointed … far from it.

As I wrote about the Fil Lorenz Little Big Band, this amounts to a “chamber ensemble” with one player per instrument, serving up a traditional Thirties sound with more intimate resources (that fits comfortably into the moderately close quarters of Biscuits and Blues). Last night’s players were Lyle Link on alto saxophone, Rob Barics on both tenor saxophone and clarinet, Mike Olmos on trumpet, Danny Armstrong on trombone, and a rhythm section of Greg Wyser-Pratte on drums, Andrew Emer on bass, and Chris Siebert leading from keyboards (piano and organ). (Readers may recall that Olmos played trumpet for Lorenz’ group last month in Union Square.)

Before Smith took the stage, the band provided an “overture” in the form of the song “Symphony in Sid” by Illinois Jacquet, written for “Symphony Sid” Torin, the leading disc jockey for jazz recordings (and subsequently host for performances) during the Thirties, Forties, and Fifties. Torin was well known by just about every leading jazz musician, and Jacquet was one of many to have named a composition after him. Last night “Symphony in Sid” immediately set the high spirits for all that would follow when Smith took the stage.

While Smith’s comfort zone is firmly fixed in the traditions of the Forties and primarily from Kansas City, her opening number was based further south along the Mississippi River. She began with “Bourbon Street Parade,” a song by New Orleans drummer Paul Barbarin. This began the evening on a high note, with extended solos taken by each of the band’s members. There was also a free-blowing Dixieland spirit in which each of the wind/brass players was playing his own take on the tune itself, a superposition of distinctive points of view that was as glorious as it was cacophonous.

In terms of my own personal experiences, the evening was an engaging blend of the familiar with opportunities for discovery. Most interesting in the latter category was Arthur Johnston’s “Sweet Lotus Blossom” with lyrics by Sam Coslow. The original title for this song was “Marahuana;” and it was written for the 1934 film Murder at the Vanities, released by Paramount Pictures. This became part of the book for Duke Ellington’s band; and last night the Skillet Lickers used Ellington’s 1929 “The Mooche” to introduce the vocal line. [added 8/26, 5:40 a.m.: The setting of the song itself, however, was Siebert’s transcription of a Forties recording made by Julia Lee.] Siebert also channeled Ellington’s spirit in the introduction he provided for Smith singing Irving Berlin’s 1926 “Blue Skies.”

On the Basie side Smith sang “I Want a Little Boy,” which is the “flip side” of the song “I Want a Little Girl,” co-written by Murray Mencher and Bill Moll. The arrangement was based on a recording made by the Basie band in 1940. At that time Basie’s vocalist was Jimmy Rushing.]

While the spirit of Kansas City was a live and well throughout the evening, the entire set was still framed by the spirit of New Orleans. The opening selection of “Bourbon Street Parade” was complemented at the conclusion by] a truly grand finale rendition of “When the Saints Go Marching In.” Armstrong joined Smith for the vocals on this one (and this was not the first time he sang during the evening); and Smith was given a table napkin by one of the members of the audience. As she started to wave it over her head, a second line formed spontaneously and wound its way in and around all of the tables in the dining area. All this was entirely in the spirit of the Biscuits and Blues menu and ended the set on a gloriously exuberant note.

Readers who have been following this site over the course of this month may have realized that this was my first effort to cover a performance since my femur fracture on August 1. Currently getting around on crutches, I was clearly in no shape to join the second line and had to enjoy it as a spectator. Nevertheless, I had my own raised spirits knowing that I was “back in the saddle” of spending time at live performances, rather than focusing only on audio and video recordings!
Posted by Stephen Smoliar at 6:27 AM