This morning it was announced that the San Francisco Symphony (SFS) has been selected to perform at the inaugural event for the new Chase Center. As most Bay Area residents probably know by now, this venue, a new 18,064-seat privately financed sports and entertainment arena, will be the new home of the Golden State Warriors. The event will be the first in the Center’s Reveal Week, which will showcase the first group of top-tier acts of perform at the Chase Center this fall. 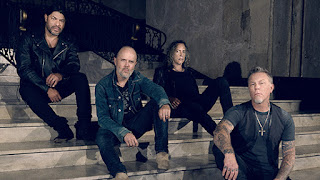 SFS will share the stage with Metallica, the heavy metal band of James Hetfield (lead vocals and guitar), Kirk Hammett (lead guitar), Robert Trujillo (bass and backing vocals), and Lars Urlich (drums). For those with a sense of history, next month will be the twentieth anniversary of a pair of concerts that brought Metallica and SFS together on the stage of the Berkeley Community Theatre. Those concerts were recorded, resulting in the release of both audio and video albums with the title S&M (for “Symphony” and “Metallica,” not the other thing). Footage from that concert, along with comments offered by Hetfield, was also released on the video created for the SFS Centennial Season.

Nevertheless, demand for this performance is likely to be high; and the first two rounds of ticket sales will be limited. Tickets will be sold online through an event page for the concert on the Chase Center Web site. However, at 9 a.m. on Tuesday, March 19, there will be a presale event exclusively for Metallica Fan Club Members. At noon that site will also include presale for Chase cardholders. Sales to the general public will begin on Friday, March 22, at 10 a.m. The tickets themselves will not be available until August 15. Online sales are being handled by Ticketmaster. Information about ticket prices will not be available until the Ticketmaster event page has been opened for public access.
Posted by Stephen Smoliar at 12:57 PM