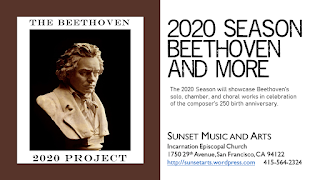 from the Sunset Music and Arts home page

Once again Sunset Music and Arts has organized its season around the calendar year, rather than the usual convention of beginning in the fall and running through the end of the following summer. Last year this site previewed the Sunset offerings in terms of five different concert series, following the approach taken for San Francisco Performances. However, because tickets are sold only for individual concerts, the 2020 offerings will be approached on a month-by-month basis, similar to previews for venues such as the Center for New Music and the Red Poppy Art House. In addition to the series that divided the 2019 season, there will be a special series called The Beethoven 2020 Project, which will feature solo, chamber, vocal, and choral compositions by Ludwig van Beethoven. Since there will be only two concerts in January, this first preview article will account for the first two months of the new calendar year as follows:

Saturday, January 11, 4:30 p.m.: The season will begin with the first of the Beethoven offerings, a solo recital by pianist Eric Tran. The Beethoven selections will be the Opus 53 (“Waldstein”) sonata in C major and Franz Liszt’s transcription for solo piano of the Opus 68 (“Pastoral”) symphony in F major. Liszt will also provide the opening selection, “Au bord d’une source” (beside a spring) from the first “year” (Swiss) of Liszt’s Années de pèlerinage (years of pilgrimage) collection. This will be complemented by the selection that will follow the intermission after the Beethoven sonata, Tran’s own composition “Water.”

Saturday, January 25, 7:30 p.m.: Jack Cimo will give a solo guitar recital. The second half of his program will be devoted entirely to the Brazilian composer Heitor Villa-Lobos. Cimo will perform selections from his études, preludes, and choros. The first half will draw upon works by both Spanish composers, such as Francisco Tárrega and Isaac Albéniz, and those of Pan America, such as Leo Brouwer and Agustín Barrios (Mangoré).

Saturday, February 8, 7:30 p.m.: Angela Kraft Cross will present an organ recital, whose program has not yet been announced.

Saturday, February 15, 7:30 p.m.: The Beethoven 2020 Project will continue with the first of two recitals presented by the duo of violinist Patrick Galvin and pianist Jung-eun Kim. Full details of the program have not yet been announced. However, there will be a performance of Beethoven’s Opus 23 (fourth) violin sonata in A minor.

Saturday, February 21, 8 p.m.: San Francisco Renaissance Voices will begin their concert season with a program entitled The World at Prayer and Play. The selections will feature William Byrd’s four-voice setting of the Mass text. Other selections will include the eight-voice setting of the “Jubilate Deo” Psalm by Giovanni Pierluigi da Palestrina, “Hosanna to the Son of David” by Orlando Gibbons and “Super Flumina Babylonis” by Philippe de Monte. The program will conclude with a collection of joyous English madrigals. Ticket prices have not yet been announced.]

Sunday, February 22, 7:30 p.m.: Vocalist and pianist Ramana Viera will present a program of Portuguese fado music. She is a native of Northern California; but her parents immigrated to the United States from Portugal, where her grandfather was a well-known musician and composer from Madeira Island. Viera will be accompanied by Dan Keller on bass, Stephen La Porta on percussion, and Jeff Furtado on guitar.]

Saturday, February 29, 7:30 p.m.: This will be the second Beethoven 2020 recital by the Galvin-Kim duo. Once again, the full program has not been announced. However, Beethoven’s Opus 30 (seventh) violin sonata in C minor will be included.

All performances will take place in the Sunset district at the Episcopal Church of the Incarnation, located at 1750 29th Avenue, about halfway between Moraga Street and Noriega Street. Ticket prices are $20 for general admission with a $15 rate for students and seniors. Because the demand tends to be high, advance purchase is highly advised. Tickets may be purchased online through Eventbrite. Each of the hyperlinks on the above dates leads to the event page for single ticket purchases. Further information may be obtained by calling 415-564-2324.
Posted by Stephen Smoliar at 10:04 AM