Those familiar with the life of Lou Harrison probably know that he spent the better part of his mature life with his partner, William Colvig, in Aptos, California. Much of their time together was occupied with designing and constructing instruments suitable for the music that Harrison was composing. Following Colvig’s death, Harrison, who was 84 at the time, decided to build his own dream home. He purchased land in Joshua Tree, California; and In 2002, with the help of many friends, he built a straw bale house of his own design sealed with adobe. Footage of the construction process was included in Eva Soltes’ documentary Lou Harrison: A World of Music. The heart of the structure was a vaulted great room proportionately designed for the performance of music. The Harrison House Music, Arts & Ecology Web site describes this as Harrison’s “last and finest instrument:” 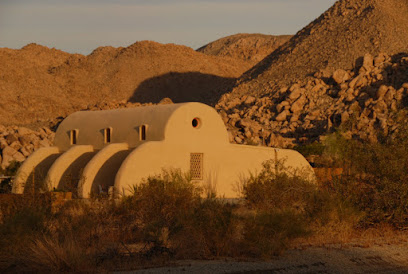 from the Harrison House Music, Arts & Ecology “About” Web page

That Web site now hosts a residency and performance program for international artists and environmental activists. The program was launched in 2006, about three years after Harrison’s death. One of the current residents is pianist Sarah Cahill, and her residency will include a free recital that will be live-streamed.

Cahill’s program will include the premiere performance of the original version of Harrison’s serenade, composed in 1943. Her program will begin with Harrison’s third cembalo sonata, composed in the same year. Other Harrison compositions will include his 1948 “Homage to Milhaud,” the 1977 waltz he dedicated to Evelyn Hinrichsen, and “Tandy’s Tango,” composed in 1992. Cahill will also use her program continue to explore the extensive repertoire of compositions by Mamoru Fujieda collected under the title Patterns of Plants. This is an ongoing project of collections of pieces all entitled “Pattern,” which began in 1995. Cahill will play selections from the seventh collection (1997), the twelfth (1999), the thirteenth (2003), and the nineteenth (2010). (That last collection, which Fujieda began in 2008, has the title The Olive Branch Speaks.) The program will also include four pieces by Emahoy Tsegué-Maryam Guèbrou, a 96-year-old Ethiopian nun.

This recital will begin at 10 a.m. on Sunday, August 9. (The early time should facilitate reception for much of a worldwide audience.) The video stream will be enabled through the Harrison House Web site. Details have not yet been announced, but the home page for that site is currently hosting two videos. Most likely a new Vimeo frame will be created on that page for viewing the live-stream.

Posted by Stephen Smoliar at 6:59 AM