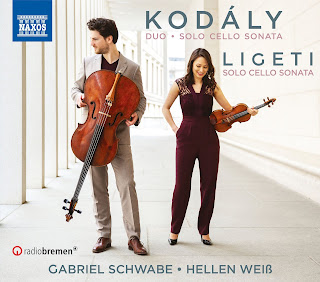 This Friday Naxos will release an album featuring the German cellist Gabriel Schwabe playing twentieth-century Hungarian music. The CD is framed by the chamber music of Zoltán Kodály, beginning with the Opus 7 duo for violin (Hellen Weiß) and cello and concluding with the Opus 8 solo sonata. Between these two selections is György Ligeti’s solo cello sonata, which was originally composed in 1948 during his studies at the Franz Liszt Academy of Music in Budapest, where one of his teachers was Kodály. As expected, Amazon.com has created a Web page to process pre-orders of this recording.

I was particularly struck by the fact that this may be the first time these three compositions (or, for that matter, any pair of them) have been juxtaposed on a single album. RCA made a landmark recording of Opus 7 pairing cellist Gregor Piatigorsky with violinist Jascha Heifetz; but I have been hard-pressed to find a recording of Piatigorsky playing Opus 8. More recently, Matt Haimovitz has taken on both Opus 8 and the Ligeti sonata; but I am not sure if he has recorded Opus 7. Personally, I am particularly interested in the Ligeti offering, since it was composed “before Ligeti became Ligeti,” so to speak. Even after it was revised in 1953, it served as a reflection on Hungarian rhetoric. Any explorations of pitches between a pair of semitones are realized only through the rhetorical device of glissando passages. Indeed, the transition between Kodály’s compositions when World War I was just beginning and Ligeti’s following the end of World War II is surprisingly smooth.

Most important is how each of these two composers explored new ways to advance the technical skills of the performer. In that frame of reference, Schwabe serves up a technically adept and rhetorically expressive account of all three of the compositions. Many listeners are likely to wonder why each of these compositions tends to be so unfamiliar. Cello students will probably not have that problem, and I would be only too happy to encounter all three of these pieces in future recital repertoires.