Yesterday afternoon San Francisco Performances (SFP) began streaming the third and last of its PIVOT 2021 programs, presented as an alternative to the four programs planned for the PIVOT Festival originally scheduled for this month. This new video is a performance by the JACK Quartet with a guest appearance by pianist Conrad Tao. The quartet members are violinists Christopher Otto and Austin Wulliman, violist John Pickford Richards, and cellist Jay Campbell; and they shared with Tao a “digital residency” hosted by the Library of Congress this past December. That residency resulted in the video that SFP is now screening as the latest addition to its Front Row Web site. 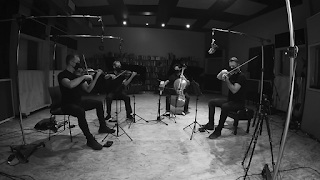 The JACK Quartet playing “Everything Changes, Nothing Changes …” (black-and-white videography by David Bird, from the PIVOT video being discussed)

The program for the video was, to say the least, boldly imaginative. Roughly half of the one-hour program involved the performance of Tyshawn Sorey’s “Everything Changes, Nothing Changes ….” This score for string quartet amounts to an imaginative synthesis of Philip Glass’ approach to repetitive structures and the subtle departures from repetition that one encounters in many of the late works of Morton Feldman. The JACK performance could not have been more focused, encouraging the attentive listener to seek out the subtle shifts in detail that reflect Sorey’s choice of title.

Equally challenging and just as satisfying was the quartet’s account of the string quartet that Ruth Crawford Seeger composed in 1931. Seeger had briefly encountered Arnold Schoenberg during her studies in Germany, which took place shortly before she began work on the quartet. However, she clearly had her own thoughts about rejecting the need for a tonal center; and, in many respects, this quartet is one of the first American compositions to break sharply from nineteenth-century traditions. It is also worth noting that Elliott Carter was familiar with Seeger’s work, which may have influenced his own unique approaches to writing for string quartet.

On the PIVOT program, however, Carter was represented by his duo for violin and piano, performed by Wulliman and Tao. This was a brashly energetic account, an excellent source to acclimate the attentive listener to Carter’s imaginative use of variations in rhythm. The rhetorical stance that Wulliman and Tao took in interpreting Carter’s score felt almost celebratory, as if, after much study, the two of them had “discovered the music” in the many note symbols that Carter had committed to paper; and, having made that discovery, they wanted the rest of the world to know about it. At the very conclusion of the video program, Wulliman underscored that sense of discovery with a solo performance of Sorey’s “For Conrad Tao.”

All of that modernism contrasted sharply with the opening selection, the ballade “Angelorum psalat,” included in the Chantilly Codex and sometimes attributed to the fifteenth-century Spanish lutenist Rodrigo de la Guitarra. While the source may have been fifteenth-century, the music itself is a clear reflection on the origins of polyphony attributed to the Notre-Dame school, which flourished between 1160 and 1250. The music is basically a two-voice melismatic organum with Richards playing the cantus firmus and Otto playing an upper-voice melisma. Otto also added parts for both the second violin and the cello, both of which spend much of the time playing pizzicato. Ultimately, this was the “overture” for the evening, encouraging the listener to sit up and take notice of what would follow.

Posted by Stephen Smoliar at 7:04 AM