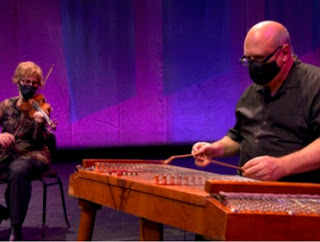 This morning the San Francisco Symphony (SFS) released the last of the five programs in its CURRENTS series streamed with its SFSymphony+ service. Each of these programs offered a one-hour presentation of a specific non-Western approach to creating and performing music. The approach of this final offering, entitled Vessel of Song, was klezmer; and the program was curated by Joshua Horowitz, performing with his two Veretski Pass colleagues, his wife Cookie Segelstein and bass player Stuart Brotman.

The program was organized in three sets. The first of these was presented only by the Veretski Pass musicians, playing arrangements of three traditional pieces from different Jewish cultures, which were preceded by “A Doina far di Kale” (a song for the bride), which Horowitz had composed. For the remainder of the program, the trio was joined by a small group of SFS musicians: Catherine Payne (flute), Linda Lukas (piccolo), Russ deLuna (cor anglais), David Chernyavsky (violin), Nanci Severance (viola), Jill Rachuy Brindel (cello), Douglas Roth (harp), and Stan Muncy (percussion). These ensemble performances were conducted by Peter Grunberg.

Horowitz and Segelstein can both be classified as ethnographic musicologists. Fortunately, at their performances they address the audience with an engaging clarity that one seldom encounters among academics. In addition, if they offer an insight to the audience, they almost always reinforce it by demonstrating it through the performance of an appropriate musical selection.

That said, through the interleaving of spoken address and musical performance, their approach to an audience is as informative as it is stimulating. On this particular occasion I was struck by Segelstein explicitly citing the inclusion of Chernyavsky among the SFS players. When he is not playing for SFS, he is a member of another klezmer group; and Segelstein observed that, because he is from Saint Petersburg, he brought aspects of Yiddishkeit to his performance that differed significantly from the “roots” behind the Veretski Pass repertoire.

Klezmer had its origins in joyous celebrations, including weddings and the variety of Jewish holidays. Among the different Jewish cultures, it had its roots among the Yiddish-speaking Ashkenazi Jews living across the many different European countries that began to form around the end of the first millennium as part of the Holy Roman Empire. In such a context Jews were almost always “other;” so it should be no surprise that their own music did not fit into what is taught in “history of Western music” textbooks. On the other hand Jews were not oblivious to how their neighbors celebrated; and, as a result, klezmer emerged as a mélange of Jewish folk influences blending with the traditional music of “other folk.”

As a result, most listeners, regardless of background, would probably find the selections performed on this particular CURRENTS program to be more familiar than the music presented in the four preceding offerings. About half a century ago, there was a famous series of advertising posters around New York with the caption “You don’t have to be Jewish to love Levy’s Jewish Rye.” This was soon followed by a record album entitled When You’re in Love the Whole World is Jewish. Today’s CURRENTS program reminded me of that album and left me with a craving for Jewish Rye.

Posted by Stephen Smoliar at 3:50 PM