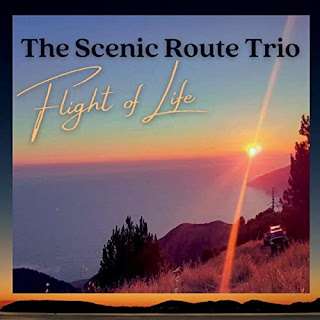 from the Amazon.com Web page for the recording being discussed

A little over a month ago BMI CrossCurrents Jazz released Flight of Life, the debut album of The Scenic Route Trio produced by the trio’s leader, bassist Ollie Dudek. This album should not be confused with The Scenic Route, a British free improvisation album performed by the trio of saxophonist John Butcher, violinist Phil Durrant, and guitarist John Russell. Flight of Life is more in the vein of straight-ahead piano trio jazz with pianist Javier Santiago and drummer Genius Wesley joining Dudek. Furthermore, all the improvisations are structured around eight tunes composed by Dudek. Also, one can almost say that The Scenic Route Trio is on the other side of the world from the Butcher-Durrant-Russell trio, since it is based here in the San Francisco Bay Area.

I have to say that I was a bit surprised to encounter this album, since it was the first time I was aware of Dudek’s “local presence.” Checking my archives, I discovered that, in August of 2018, he was playing bass for a quartet called “Swings Left,” created and led by pianist Rob Reich and including Ben Goldberg on clarinet and Andrew Stephens on trumpet. That gig took place at Bird & Beckett Books and Records; and, while I have previewed several of Reich’s jazz gigs, Dudek has not reappeared on my radar over the last three years.

Having just listened to Flight of Life, I have to say that I rather regret that absence. Considering that the nine tracks (the last being an alternate of one of the tunes) were conceived and recorded under pandemic conditions, this is a strikingly upbeat album; and readers probably know by now that I much prefer this rhetorical stance to that of the more “meditative” albums influenced by COVID-19 that I have encountered. Indeed, Dudek’s track entitled “Pandemia” gets off to a joyous start that is the perfect antidote for “pandemic blues;” and all three members of the trio serve up their own take on that joyousness. Dudek saves his quieter rhetoric for “Fog Waltzin’,” which “locals” like myself are likely to interpret as a love song for Karl the Fog.

As a result of my encounter with Flight of Life, I hope that Dudek will update the Gigs Web page on his Web site. Bird & Beckett still seems to be on his radar, as is the lobby of the Balboa Theatre, where I remember listening to a combo play the music of Lee Morgan prior to the screening of the film I Called Him Morgan in July of 2019. (The drummer for that combo was Wesley, who also played in a trio with pianist Adam Shulman and bassist Marcus Shelby in the film The Marcus Shelby Trio: Harriet Tubman and the Blues, which was streamed by Stanford Live this past March.) Keeping up with local jazz has been more difficult than following the classical scene; but, having listened to Flight of Life, I certainly hope my schedule can make room for a “live” performance by The Scenic Route Trio.

Posted by Stephen Smoliar at 9:04 AM