Last night in Davies Symphony Hall, the San Francisco Symphony (SFS), led by Music Director Esa-Pekka Salonen, presented the world premiere of “Song of the Flaming Phoenix” by Chinese-born American composer Fang Man. The work is scored for a very large ensemble with four parts in each of the instrumental sections supplemented with such a diverse and massive collection of percussion instruments that the players barely had room to move from one instrument to another. If that were not enough, the instrumentation also includes a concertante part for the sheng, a Chinese mouth organ, capable of playing multiple pitches simultaneously, whose vintage dates back at least as far as 1100 BCE.

Fang spent twenty months working on this composition, during which her mother’s health was steadily declining. Fang’s note for the program book observed, “On the night I was writing the final bars of the piece, my father called to tell me that my mother had passed away.” This brought an ironic twist to the concept of the phoenix, which rises into a new life from the ashes of its own cremation.

Beyond the context of Fang’s creation of “Song of the Flaming Phoenix,” however, is her capacity to elicit a vast landscape of sonorities whose diversity goes far beyond what any pair of ears can expect from even the largest of ensembles. While her academic credentials include a Doctor of Arts degree she earned while studying with Steven Stucky and Roberto Sierra at Cornell University, her post-graduate activities took her to Paris to study at IRCAM, the Institut de recherche et coordination acoustique/musique (Institute for Research and Coordination in Acoustics/Music). While this organization has long been a venue for research into the synthesis of sounds based on electronic and/or digital technology, Fang seems to have cultivated an extraordinary talent for synthesis working only with “analog” instruments. 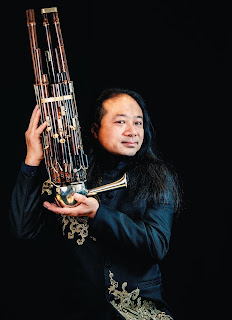 Mind you, the sonorities of the sheng make for a sharp contrast with just about every SFS instrument that was deployed in the performance of “Song of the Flaming Phoenix.” Furthermore, the sheng performance by Wu Wei clearly extended significantly beyond traditional techniques. This included interleaving playing the instrument with his own vocalizing, along with a “guest appearance” of a cardboard tube that evoked glissando techniques based on the length of the vibrating chamber.

The result was far more diversity in sonorities than one could have possibly anticipated. One is tempted to evoke the metaphor of the Chinese banquet, each of course of which has its own distinctive flavor to contrast with the other courses. However, while such a banquet is rigidly segmented (to make sure that the flavors of the different courses do not conflict with each other), Fang conceived “Song of the Flaming Phoenix” as a vast landscape of diverse sonorities, where gradual transition takes precedence over segmentation. Thus, over the course of its 25 minutes of performance, the music guides the listener across that landscape, allowing every individual feature to register with the perceptive listener without ever imposing explicit boundaries of segmentation.

Perhaps the most apposite metaphor is that of one of those inventive rides at an amusement park, which provides such a rich and engaging experience that, when it is all over, one can only think about experiencing it again.

When Salonen first approached Fang about her commission, his idea was to couple a new work with Alexander Scriabin’s Opus 60 tone poem, “Prometheus: The Poem of Fire.” This composition also required a large ensemble, including piano, an optional choir, and abstract visuals provided by a color organ. Sadly, those plans for this week’s subscription concerts had to be abandoned, probably due to lack of preparation time (and possibly technical resources).

Instead, Fang’s composition, which began the program, was complemented at the conclusion by Scriabin’s Opus 54, entitled “The Poem of Ecstasy.” This earlier orchestral composition also involved the composer’s meticulous attention to sonorities (compensating for limitations in thematic material). Salonen led the SFS ensemble through the many subtleties of those sonorities, whose sources tended to be more familiar than those evoked by Fang but whose combinations were just as striking in their inventiveness.

These two excursions into unfamiliar auditory territory were separated by the more familiar sonorities of a piano concerto. The soloist was Jean-Yves Thibaudet, performing Franz Liszt’s second piano concerto in A major. Readers may recall that the first of the two concertos was played by Yuja Wang under the baton of Michael Tilson Thomas this past January, when it was given a treatment more brutal than it deserved. The second concerto is no less subtle than the first; but both Thibaudet and Salonen brought at least a modicum of credibility to their account. There is a paucity of both thematic material and development over the course of a series of episodes played without interruption; but, when the theme transmogrifies into a march for its final climax before the coda, there is at least the suggestion that the score has arrived at a moment of achievement.

Liszt may have been a bit out of his element sandwiched between Fang and Scriabin, but Thibaudet and Salonen did their best to allow his voice to have its say.

Posted by Stephen Smoliar at 7:02 AM