Rebecca Clarke: Beyond the Viola Sonata 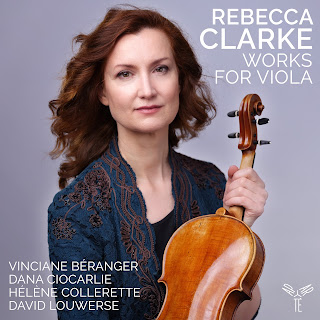 Over the course of my writing, I have enjoyed making acquaintance with the music of Rebecca Clarke. Clarke was born in Harrow in 1886 and studied at the Royal Academy of Music and Royal College of Music in London. However, she first traveled to the United States in 1916 and submitted a sonata for viola and piano to a competition sponsored by Elizabeth Sprague Coolidge (who happened to be her neighbor in western Massachusetts) in 1919. She returned to pursue a career as a performer in London in 1924, but World War II led to her returning to the United States and staying there for the rest of her life.

One week from today Aparté will release an album of chamber music that Clarke composed for viola performed by Vinciane Béranger. For most of the tracks, she is accompanied at the piano by Dana Ciocarlie. However, three of the tracks account for duo performances with cellist David Louwerse; and there is a “Dumka” composed for violin (Hélène Collerette), viola, and piano. As is usually the case, Amazon.com is currently processing pre-orders for this album.

The album begins with Clarke’s major effort, which is probably her best-known composition, the 1916 sonata. Clarke did not win Coolidge’s competition, but she was tied for first place. As a reminder of early twentieth-century thinking, the judges could not believe that the sonata had been written by a woman, preferring, instead, to assume that Ernest Bloch had submitted a second piece to the competition using “Rebecca Clarke” as a pseudonym. (The prize was ultimately awarded to the work that Bloch had submitted under his own name.) However, in 1923 Coolidge gave Clarke a grant, which was applied to the composition of her 1923 rhapsody for cello and piano.

Unless I am mistaken, the entire album is devoted to music that Clarke composed in the United States. Most of the selections were composed between 1916 and 1921. These include a world premiere recording of a version of the “Londonderry Air” scored for viola and cello. However, there are two tracks of music that was probably composed at the beginning of her second move to the United States, a passacaglia for viola and piano based on an “Old English Tune” and a dumka for violin, viola, and piano. In addition to English and Czech influences, the final track, scored for viola and piano, is entitled “Chinese Puzzle.” To be fair, however, this music is not so much “Chinese” as a take on clichéd pentatonic music assumed to be Chinese in nature!

However, even if the “pedigree” of that last track is doubtful, Béranger’s album provides a more comprehensive account of Clarke’s achievements as a composer than has been previously available; and I hope I shall not have to wait too long for an opportunity to listen to compositions other than the sonata (which I heard performed by Jodi Levitz at the San Francisco Conservatory of Music) in recital settings.

Posted by Stephen Smoliar at 8:08 AM