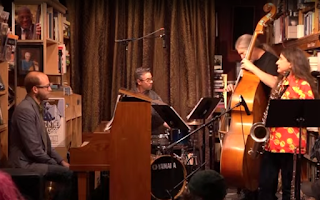 Brett Carson, Jason Levis, Bill Noertker, and Annelise Zamula at Bird & Beckett (screenshot from the video of the performance)

Last night bassist Bill Noertker brought his combo to Bird & Beckett Books and Records. The two-set show was “recorded in anticipation of an upcoming ‘Noertker’s Moxie Live at  Bird and Beckett’ CD.” “Noertker’s Moxie” is the name of the combo Noertker has formed with wind player Annelise Zamula to perform his own compositions. Last night’s rhythm section consisted of Brett Carson on piano and Jason Levis on drums.

Noertker tends to have a prankish disposition which surfaced last night in his focus on Samuel Beckett, rather than Bird (Charlie Parker). The purpose of recording was to document a work-in-progress, which Noertker described as “a series of odd little ditties inspired by Samuel Beckett’s odd little novel Watt.” Since almost all of my Beckett experiences have involved his staged works, I must confess that my knowledge of Watt never reached beyond the Paperback Booksmith store in Harvard Square. Needless to say, Noertker’s introduction of one of those ditties, “Hunchy Hackett,” named after the hunchback in Watt, had the playful opacity of Beckett’s way with words.

Beckett was not the only influence on last night’s first set (which was the only set I live-streamed from home). “Traced in the Shadow” appropriates a phrase from Wallace Stevens’ poem “Thirteen Ways of Looking at a Blackbird;” and “Do You Know My Aunt Eliza?” is the title of a 1941 painting by Leonora Carrington. Noertker clearly enjoys making music with inspirational sources. His inventive thematic material undergoes imaginative realizations through both Zamula’s diversity of wind styles and Carson’s intense focus at the piano keyboard. Listening to these pieces requires focus, but that focus is readily rewarded.

Posted by Stephen Smoliar at 7:01 AM