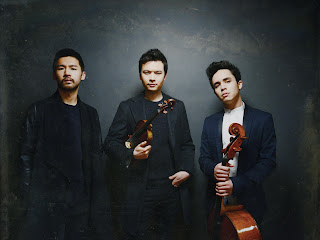 Last night in Herbst Theatre three young musicians, each with previously connections to San Francisco Performances (SFP). Violinist Stefan Jackiw made his SFP debut in April of 2014 and cellist Jay Campbell made his debut in January of 2020 performing with violinist Patricia Kopatchinskaja. Conrad Tao is making his first live appearance with SFP; but, during the pandemic, he performed with the JACK Quartet in a virtual PIVOT concert in April of 2021. These three performers joined forces in 2015 to present themselves as the Junction Trio. Their program featured two trios both of which were composed during an early decade of the twentieth century.

The earlier of these was Charles Ives’ only piano trio, which he completed in 1911. However, the piece was not published until 1955, the year after the year of Ives’ death. The second trio is much better known and much more frequently performed. Maurice Ravel’s trio was composed in 1914.

The program also began with a composition that Tao regards as his “Opus 1.” “Eventide” amounts to a tone poem for piano trio, which evokes, as Tao put it “the gentle arrival of night.” This may be taken as the composer’s personal approach to working with repetitive structures. It is also worth noting that the calmness of Tao’s rhetoric precedes the stormy qualities of both Ives and Ravel.

The Ravel trio is much better known than the Ives. (At the very least, it had been given a more than generous number of performances before the Ives score was published.) Junction clearly understood the wide scope of rhetorical stances taken over the course of the trio’s four movements. The result was a presentation that acknowledged the entirety of that scope while, at the same time, bringing a freshness of interpretation from the latest “on the rise” generation of performers.

Ives’ music, on the other hand, comes across with a rhetoric of raucous spontaneity. There is a sense that one theme leads to another through free association, and that association is freest when Ives evokes fond memories of both sacred and secular favorites. It should be no surprise that many Ives scholars approach his compositions as “tune detectives,” approaching Ives’ many quotations as biographical reflections. The ultimate book of “tune detection” is Clayton W. Henderson’s The Charles Ives Tunebook, probably the most thorough account of all of those quotations to date. (The book was published in 1990.)

What was most important last night was the clarity with which all three of the trio members forged their collective path through the wilderness of both the original and the recollected. It is also worth noting that all three of the players seemed to have fun negotiating that path. Certainly, from the listener’s point of view, fun is very much part of the bargain. It used to be that the strongest advocate of Ives trio was the Beaux Arts Trio. Encountering a “new generation” trio approach this music last night was, at least for this old-timer, a real treat from beginning to end.

As an afterthought, it is worth noting that the 60-CD anthology of Beaux Arts Trio recordings on Philips includes the Ives trio. It turns out that it follows the Ravel trio on CD 54 of the collection. That particular CD then concludes with Dmitri Shostakovich’s Opus 67 (second) piano trio. One might say that the gathering of the music is as stimulating as the gathering of the musicians!

Posted by Stephen Smoliar at 8:06 AM