Last night, as part of the 2016–17 Kick-Off Weekend at the San Francisco Conservatory of Music, Eric Dudley made his debut as the new conductor of the Conservatory Orchestra in the Concert Hall. He prepared a program of fascinating extremes, beginning with two pieces of from the late twentieth century and then complementing them after the intermission with a symphony from the early nineteenth. The result was an enlightening case for just how much the practice of making music could change over the course of 200 years.

The major work during the first half was John Adams’ “The Chairman Dances,” which he subtitled “Foxtrot for Orchestra.” Adams has long enjoyed a reputation for being playfully provocative. In this case the targets of his title are Mao Zedong and his wife Jiang Qing, while the subtitle may well have been slyly aimed at Fred Astaire and Ginger Rogers. Adams described the piece as a “warm-up” for writing the music for the final act of his opera Nixon in China; and the central theme of “The Chairman Dances” is the only material encountered in the full opera score. In that act the six primary characters of the opera, Richard and Pat Nixon, Mao, Jiang, Henry Kissinger, and Zhou Enlai are all having a sleepless night. Both Mao and Jiang reflect on their early romantic encounter, while the audience sees two dancers at the back of the stage as embodiments of their memories.

It would be a bit of a stretch to say that they are dancing a foxtrot; but, if we are to believe what Adams wrote about “The Chairman Dances,” then the piece served to provide them with a backstory. In that story Jiang gatecrashes a presidential banquet (definitely not the one from the second act of Nixon in China) and dances seductively. Her dance lures Mao down from his portrait on the wall, and he joins her in her dance. The coda then depicts the sound of an old mechanical phonograph slowing its pace as its spring weakens.

Between the recordings made by Nonesuch of Edo de Waart conducting the San Francisco Symphony and EMI of Simon Rattle conducting the City of Birmingham Symphony Orchestra, “The Chairman Dances” has received considerable exposure and enjoys popularity. However, Adams composed the piece for a very large ensemble (getting away from the confines of an opera orchestra pit); and the full scope of his creation goes far beyond the ability of even the most up-to-date audio technology to capture the the richness of a concert experience. It is to Dudley’s credit that he did such an excellent job of bringing the all of that richness in this score to his audience last night, creating an engagingly stimulating experience that was as much spatial as it was auditory.

The “complement” to Adams’ creativity during the second half of the program was none other than Ludwig van Beethoven, whom, as many know from performances or the recording of “Absolute Jest,” has been another target of Adams’ playful provocations. Last night’s selection, however, was far removed from jest. Dudley chose to conclude his program with Beethoven’s Opus 55 (third) symphony in E-flat major. Presumably, Beethoven had intended to dedicate this symphony to Napoleon as the man that would bring democracy to the European continent. However, after Napoleon was crowned Emperor in 1804, Beethoven scratched out his name from the title page, replacing it with the word “Eroica.”

This turned out to be a banner week for Beethoven, since it also included the San Francisco Symphony, led by Music Director Michael Tilson Thomas, performing Beethoven’s Opus 67 (fifth) symphony in C minor. That made for a generous supply of “heroic Beethoven” in one week. In that context it is worth observing that, under Dudley’s direction, the Conservatory Orchestra definitely held its own, even if a few of the edges were rougher than they could have been. More important was that Dudley was as capable of bringing fresh ideas to Opus 55 as MTT had done with Opus 67.

The most interesting came in the final movement during the second variation of that movement’s theme. If one looks at the sixteen measures of that variation in isolation on a printed score, they look like they could have been written for string quartet: 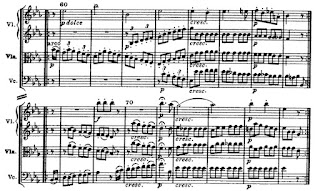 Dudley decided to have that variation performed by the Principals of the four string sections as if it were a string quartet. This may have been because those four performers, Christopher Whitley (first violin), Kumiko Sakamoto (second violin), Luis Bellorin (viola) and Bridget Pasker (cello), happen to be the members of the Thalea String Quartet. Dudley could leave it to them to give a highly satisfying quartet performance, with a coyly nuanced conclusion, after which he resumed leadership of the full ensemble.

If there was any shortcoming to his approach, it involved management of the symphony’s many forte moments. There are no end of energetic bursts throughout the entire score, and it seemed as if Dudley had not yet sussed out which of these were the most significant climaxes, let alone the peak that rises above all others, so to speak. Thus, there was a problem of the symphony progressing as one outburst after another (to warp Winston Churchill’s famous comment about history). Nevertheless, the Conservatory Orchestra managed to keep up with Dudley’s enthusiastic energy, which says a lot about how quickly he has established a strong working relation with the group.

The program began with the first of five fanfares Joan Tower composed under the general title “Fanfare for the Uncommon Woman.” The title is clearly a playful jab at Aaron Copland’s “Fanfare for the Common Man,” which tends to sound these days more than a little overblown in its patriotism. Tower’s music was more in tune with the more skeptical Zeitgeist of the Eighties; and the piece was written to acknowledge one of the first major woman conductors, Marin Alsop. Last night, however, the real “uncommon woman” of the show was student timpanist Mika Nakamura, who kicked some serious ass as she took on a devilishly challenging timpani part. Through Nakamura’s timpani work, Dudley definitely knew how to begin his program by taking a strong hold on the audience’s attention.
Posted by Stephen Smoliar at 8:03 AM