The AT&T Yahoo! polling process is at it again, and once again the focus is on Sarah Palin. Bearing in mind the unscientific statements of both context and question, I think that the numbers still have something to say. Here they are: 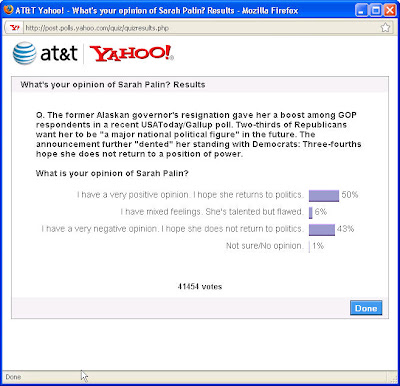 First of all, in reviewing the record of past polls I have examined, the number of respondents is a considerable distance from those that responded over the final debate between John McCain and Barack Obama. On the other hand the number is about double that of the response to the poll over Palin's Convention speech. Some of this may have to do with a slight shift in my own timing for collecting the data, but I think the increase also reflects the increase in attention that Palin managed to muster during the Presidential campaign. Nevertheless, the most important observation is the bimodality of the result. When it comes to Palin, there is no middle ground; she is as much an instrument of sharp division across the electorate as she has ever been.

My own conclusion is that the American population remains as deeply divided as it was during the election; and it seems as if maintaining (if not aggravating) that division is going to be a major strategy in the Republican playbook. My fear continues to be that, as the division grows, so will the country's susceptibility to demagoguery; and I still believe that Palin has "the right stuff" for emerging as a demagogue who will promise to heal that division. During the election I was up front about the alarmist nature of my position and only a bit more subtle in my efforts to draw parallels with the rise of the Third Reich. Whether or not my alarmism is grounded in paranoia remains to be seen; but I spent my student days with posters that said, "Just because you're paranoid doesn't mean that they aren't out to get you!"

Posted by Stephen Smoliar at 9:26 AM