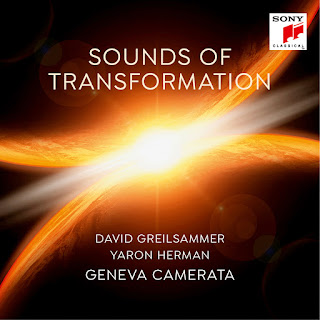 Pianist David Greilsammer seems to have slipped off my radar sometime during 2012, probably in conjunction with his departure from the Naïve Classics label to make his recording debut with Sony Classics. While with Naïve he had made two albums of piano concertos by Wolfgang Amadeus Mozart, performing with his own Suedama (an anagram of “Amadeus”) Ensemble, which made a deep impression on me. He also brought his Mozart skills to Davies Symphony Hall in February of 2011, performing as concerto soloist when Bernard Labadie appeared as guest conductor of the San Francisco Symphony.

Greilsammer’s approach to Mozart was adventurous in just about all of the best possible ways. I suppose that is why I was not surprised when I received word of Sony Classics releasing his latest album entitled Sounds of Transformation. The “core” of this album is a performance of Maurice Ravel’s 1931 piano concerto “in G [with no specification of major or minor],” written shortly after his single-movement left-hand concerto. Those who have followed me for some time know that I have enjoyed dwelling on the collegial relationship that Ravel had with George Gershwin, whose “Rhapsody in Blue” and three-movement piano concerto “in F” predated both of Ravel’s concertos. Ravel seems to have enjoyed listening to jazz but was also smart enough to realize that he could not make music that way. Nevertheless, I have suggested in the past that the “in G” concerto demonstrated just how keenly Ravel could listen to Gershwin’s music.

I was therefore intrigued when I saw that many of the tracks of Sounds of Transformation on either side of the Ravel concerto involved jazz musicians Yaron Herman on piano and Ziv Ravitz on drums. Indeed, the primary idea behind this album involved how music by Baroque composers Jean-Baptiste Lully, Marin Marais, Jean-Philippe Rameau, and Henry Purcell could be subjected to jazzy “transformation.” Then, for good measure, the same approach was applied to Charles Ives’ “The Unanswered Question” (suggesting, perhaps, that jazz might be the “answer”).

Unfortunately, listening to this album left me with the feeling that Ravel had been far more accomplished in his ability to listen to Gershwin than any of the musicians on this album were when it came to listening to either jazz or the composers they tried to “transform.” I am reminded of that old saw that those who ignore history end up repeating it, with Karl Marx’ added observation that what is tragedy the first time becomes farce the second. On this album there seems to be an unawareness of history that had not been evident when Greilsammer was making his Mozart recordings. Furthermore, that unawareness tends to lay waste to both the Baroque era and the twentieth century (both Ives and jazz) in equal measure.

To be fair, my own discontent may owe much to Lalo Schifrin’s 1966 studio album entitled The Dissection and Reconstruction of Music From the Past as Performed By the Inmates of Lalo Schifrin's Demented Ensemble as a Tribute to the Memory of the Marquis De Sade. Each of the ten tracks on this album took a different Baroque source as a point of departure and sent it off on a new (and delightfully twisted) direction. Most important is that Schifrin and his musicians did not take themselves overly seriously (as is abundantly clear from the title of the album). However, just as important was that, in going their own way, they felt no obligation to give the listener a “straight” account of where the journey began.

This album was one of my favorite vinyls when I purchased it shortly after its release. At that time I knew far less about the Baroque period than I do today. One result, however, is that, every now and then, I have a listening experience in which I immediately recognize a piece that had been one of Schifrin’s sources. (Back in my time with Examiner.com, I even called out one of those occasions that took place during a series of concerts surveying all of Rameau’s keyboard music.)

I suppose my experiences with Schifrin’s album left me with a somewhat curious precept:

All jazz comes from somewhere else, but you do not need to know what that source was to enjoy the listening experience!

Sounds of Transformation, on the other hand, wants to call out the source material explicitly. Sadly, the result is that just about all of the jazz sounds labored, while the “source tracks” sound little more than gratuitous. I realize that there is probably more than a little back-in-the-day crabbiness in my rhetoric. Even so, I feel as if not only Schifrin but also others with similar interests, such as Ward Swingle and Joshua Rifkin, were better equipped in matters of both background knowledge and expressive talent to take on the sort of “transformational” task that this new album never gets beyond fumbling.
Posted by Stephen Smoliar at 12:41 PM