Richard Egarr will Return to Jam with PBO 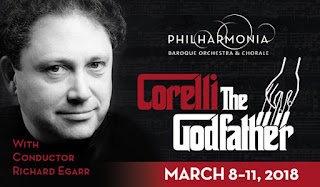 Since tomorrow will see the return of cellist Steven Isserlis to perform as guest artist with the Philharmonia Baroque Orchestra (PBO), this is as good a time as any to observe that the March offering for this group’s 37th season will also see the welcome return of a familiar face. Following up on his last delightful visit in the fall of 2015, keyboardist Richard Egarr will lead PBO in a program entitled Corelli the Godfather. Readers may recall that, on his last visit, Egarr brought the spirit of jam sessions to performances of four of Johann Sebastian Bach’s “Brandenburg” concertos, using his harpsichord for an abundance of “solo licks” (particularly in the BWV 1050 concerto in D major) while also holding down the “rhythm” (i.e. continuo) work.

For next month’s visit that spirit of jamming will be directed at the concerti grossi published by Arcangelo Corelli as his Opus 6. Egarr will frame his program around two of these twelve concerti, the tenth in C major and the second in F major. These will be complemented by two selections from another collection of twelve concerti grossi, George Frideric Handel’s Opus 6. The Handel concerti will be the fourth in A minor (HWV 322) and the first in G major. (HWV 319). In addition Egarr will perform as soloist in the HWV 297 organ concerto in D minor, which is an arrangement of the tenth concerto from the Opus 6 collection (HWV 328). Finally, there will be a performance of the fifth sonata (in G major) from Georg Muffat’s collection of sonatas for various instruments, armonico tributo. (That volume would subsequently provide thematic material for Muffat’s own collection of twelve concerti grossi.)

The San Francisco performance of this concert will take place on Thursday, March 8, beginning at 8 p.m. The venue will be Herbst Theatre, which is located at 401 Van Ness Avenue on the southwest corner of McAllister Street. Ticket prices will range from $28 to $120 for premium seating. Tickets are currently available for advance purchase through a City Box Office event page, which displays a color-coded seating plan that shows which areas correspond to which price levels.

In addition, this concert will be preceded by the next PBO SESSIONS event, entitled Corelli the Godfather: the Corleone of the Concerto. This will involve a 90-minute multi-media in-depth examination of the nature of the concerto and concerto grosso practices. The discussion will be supplemented by performances of music by both Corelli and Handel. As is always the case with PBO SESSIONS events, the presentation will be followed by a reception open to all ticket-holders offering complimentary wine and a chance to meet the musicians.

This PBO SESSIONS event will take place on Wednesday, March 7, at 8 p.m. The venue will be the ODC Theater, located in the Mission at 3153 17th Street on the southwest corner of Shotwell Street. All tickets will be sold for $25. They may be purchased in advance online through an event page on the PBO Web site.
Posted by Stephen Smoliar at 8:40 AM