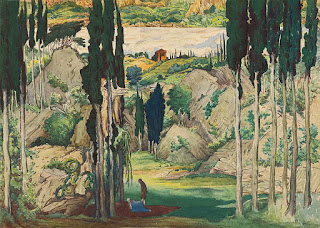 
Towards the end of last year, the German Coviello Classics label released a new recording of the complete score that Maurice Ravel composed for the one-act ballet in three scenes, “Daphnis et Chloé,” choreographed for the Ballets Russes by Michel Fokine. Originally available only as an import, American distribution began this past February. The performance is by the Sinfonieorchester Aachen, led by its Generalmusikdirector at the time of recording (June of 2015), Kazem Abdullah.

Like Fokine’s ballet, first performed on June 8, 1912, Ravel’s score is seldom performed in its entirety. One reason is that performance requires a full chorus, which never sings any text but simply provides additional shades of color to Ravel’s imaginative approach to instrumentation. This particular recording draws upon the participation of six different choral groups, five from Europe and one from the United States.

By way of a chronological perspective of the Ballet Russes repertoire, Fokine created “Daphnis et Chloé” after having choreographed “Petrushka,” which was first performed, with music by Igor Stravinsky, on June 13, 1911. Of greater interest is that the “Daphnis” ballet preceded Vaslav Nijinsky’s “The Rite of Spring,” whose choreography and equally provocative music by Stravinsky sparked a still-remembered riot on May 29, 1913. Both Stravinsky scores went on to become “staple” offerings in the concert hall, contrasting significantly with Ravel’s complete score.

This should not be taken as a swipe at Ravel. Working under the encouragement and support of Sergei Diaghilev, Stravinsky built up a highly effective toolbox of techniques for reinforcing the narrative of a ballet scenario. Those techniques were already vividly clear in his score for Fokine’s “The Firebird,” composed in 1910; and, by the time he had advanced to “The Rite,” one might almost say that the music contributed more to the scenario than the dancing did. Ravel, on the other hand, was more in his element in concert and recital halls; and the scenario for “Daphnis” was basically a pastoral punctuated by only a few episodes of compelling action.

This may explain why the two suites that Ravel extracted from his score (particularly the second) have endured strongly up to the present, while only the most passionate balletomanes are likely to be able to tell you anything about Fokine’s contribution. Nevertheless, the full score tells the attentive listener much about Ravel’s capacity to work with sonority as compellingly as he could work with thematic material. On this recording Abdullah’s leadership clearly understands that capacity all the way down to all of the composer’s intricate details, including those requiring treating the choral resources as another ensemble of instruments.

From a practical point of view, concert encounters with Ravel’s full score are likely to be few and far between; but this recording provides more than adequate compensation for that lack of opportunities.
Posted by Stephen Smoliar at 8:55 AM