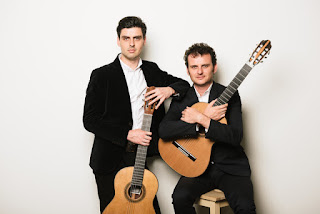 Readers probably know by now that the Guitar Series presented by San Francisco Performances (SFP) is shared with the Omni Foundation for the Performing Arts. The Foundation also presents an annual Dynamite Guitars series, which includes the SFP offerings but supplements them with several additional events. The first of those events will take place early next month and will be a debut performance.

That debut will be a duo recital by Slava and Leonard Grigoryan. These brothers have established themselves as the leading guitar duo in Australia, and San Francisco will be one of the venues for their upcoming tour of the United States. That tour will begin at the University of Nevada in Las Vegas on November 1; and San Francisco will be their last stop in the West, before they perform for the Nashville Guitar Society at Belmont Mansion.

The program will involve music composed for guitar, including recent works by both of the brothers, and arrangements. Most interesting will be a “call-and-response” offering motivated by a suite for two guitars composed by multi-instrumentalist (and ECM recording artist) Ralph Towner, which will be followed by Leonard’s “Blues for Ralph.” Slava will open the program with his “Fantasy on a Theme by William Lawes,” Leonard will follow the intermission with “This Time,” and the evening will conclude with their jointly composed Sailboat Suite.

The other original guitar composition on the program will be the “Retratos” suite by Radamès Gnatalli. The brothers will also perform arrangements of two art song selections, “None but the Lonely Heart,” the last of the six songs in Pyotr Ilyich Tchaikovsky’s Opus 6 collection, and “Songs My Mother Taught Me,” the fourth of the seven songs in Antonín Dvořák’s Gypsy Songs (Opus 55) collection. They will also present George Frideric Handel’s HWV 452 keyboard suite in G minor.

This performance will begin at 7:30 p.m. on Saturday, November 9. The venue will be St. Mark’s Lutheran Church at 1111 O’Farrell Street, just west of the corner of Franklin Street. Ticket prices are $55 on Orchestra level and $45 in the balcony. Tickets may be purchased online through a City Box Office event page. Tickets may also be purchased by calling 415-242-4500.
Posted by Stephen Smoliar at 9:22 AM