Last night the San Francisco Contemporary Music Players (SFCMP) streamed its 50th Anniversary Concert. As might be expected, the event included a generous share of testimonials. However, these were delivered with both brevity and clarity, allowing most of the one-hour event to be dedicated to the performance of contemporary music. While SFCMP has often presented “historical” offerings of music that was “advanced” for its time, last night’s program was very much in the “immediate present,” serving up works by living composers that are still active in their musical pursuits.

However, this was a program in which the identify of the “Players” themselves signified as much as the “Contemporary” nature of what they were playing. Of the six compositions performed, the first five were scored for a single instrument; and the last was a duet performed by two of the players that had given solo performances. The solo offerings and their performers were, in “order of appearance,” as follows: 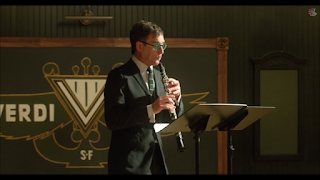 As a former clarinetist, I confess to being particularly drawn to the wind selections. “Press Release” was the perfect example of how one can create two-voice polyphony for an instrument designed to play only one note at a time. Through his dexterous fingering and meticulous breath control, Anderle delivered a crystal-clear delineation of those two voices, allowing the attentive listener not only to distinguish them but also to relish the many different approaches to interplay. Note that phrase “designed to play only one note at a time.” “Gyfu” was one of best studies in multiphonic technique (in which the wind player is required to sound multiple tones simultaneously) that I have encountered ever since I first learned about multiphonics in my graduate student days. Experiencing Bruckmann’s “real-time” breath control (required to induce sounding multiple tones) was absolutely riveting, making for an adventurous journey through the deep woods of unconventional sonorities.

It goes without saying that one seldom encounters performances of music written explicitly for solo trombone. The instrument’s medieval predecessors tended to present listeners with solemn chorales, relying on the lower registers to capture the profundity of that solemnity. However, from the earliest days of jazz, the trombone has developed a more raucous reputation. The very title of Lindberg’s piece seemed to carry its own connotations of raucousness; and Lai-Tong’s command of the techniques behind that raucousness wrapped up the series of solo compositions on an exhilarating note (so to speak).

Both the Salonen and Kernis offerings tended to reflect the more conventional techniques of their respective instruments. “Soliloquy” was presented by Tanenbaum as a study in stillness, providing just the right complement to Lang’s over-the-top polyphony. The Salonen offering, on the other hand, almost served as an “overture,” preparing the listener for the adventurous diversity of sonorities and thematic content that would follow. That introduction was complemented by the concluding performance of the duo “Disco Toccata” by Guillaume Connesson. This provided just the right complement to “Joe Jack Binglebandit,” extending lively rhetoric with a keen sense of humor to the interplay of Anderle’s clarinet work with Addario-Berry’s cello technique.

Posted by Stephen Smoliar at 7:49 AM