Last night the San Francisco Contemporary Music Players (SFCMP) presented their Voices in Reverberation program, the on STAGE streamed offering in its 50th season. The members of the ensemble were joined by guest artist Pamela Z, a leading figure in the creation and the performance of adventurous vocal music. Not only did she give a solo account of the “Breathing” movement from her Carbon Song Cycle, completed in 2013; but also she was the soloist in “Pine Tree,” composed for her by Caroline Shaw and scored for clarinet (Peter Josheff), piano (Kate Campbell), viola (Meena Bhasin), cello (Hannah Addario-Berry), and voice. In both of these works, Z’s vocalizations were augmented through real-time processing by laptop computer.

I have always had a soft spot for “Breathing.” This is not just due to Z’s inventive approaches to electronic augmentations to “natural” vocalization. What I enjoy is the extent to which those approaches make the music an étude directed as much at the listener as at the performer. Through her capacities for subtlety, Z draws the listener into her rich diversity of sonorities, thus cultivating that capacity for attentiveness wherein listening overtakes mere hearing. Those capacities served her equally well in “Pine Tree,” where vocalization included the delivery of the text from Yoni Noguchi’s “I Hear You Call, Pine Tree.” Sadly, however, Shaw never really homed in on a compelling instrumental rhetoric that would provide a suitable context for Z’s vocal work.

Ironically, that sense of interplay between text and context emerged with greater clarity in the strictly instrumental offerings of the evening. This was particularly the case in the opening selection, “Inexpressible v.2” by Amadeus Regucera. Indeed, the very title suggests an interplay of text and context that may not be entirely amicable. The work was scored for flute (Tod Brody), violin (Hrabba Atladottir), and cello (Addario-Berry); and the “text” relied heavily, if not entirely, on non-standard performance techniques. To some extent, this served as a “primer” for the devices Z would subsequently evoke in her solo work; and, as if to reinforce that premise, towards the end of his piece Regucera had Brody augment his flute work with simultaneous vocalization of phonemes.

Atladottir also gave a solo account of “Sabina,” Andrew Norman’s sonic account of his impressions of  the basilica of Santa Sabina in Rome. This involved a subtle account of a variety of violin sonorities, concluding with what amounted to an unembellished account of plainchant. The overall idea was imaginative, and Atladottir’s interpretation was technically impressive. However, Norman never seemed to home in on those rhetorical factors that keep the listener as absorbed in the music as the performer needs to be. 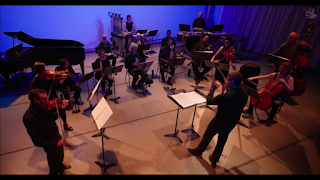 The program concluded with a full ensemble performance of John Adams’ “Son of Chamber Symphony.” Almost exactly a month ago I wrote about the recording of this music that had been released by the Boston Modern Orchestra Project, coupling the piece with Adams’ earlier “Chamber Symphony.” The earlier composition was influenced by, in Adams’ words, “American cartoon music,” complete with clever titles including “Roadrunner” as a nod to the Warner Brothers cartoon character. The movements of “Son of Chamber Symphony,” on the other hand, have no titles; but, as conductor Eric Dudley (SFCMP Artistic Director) observed, the music began with an unmistakable nod to the Scherzo (second) movement from Ludwig van Beethoven’s Opus 125 (ninth) symphony in D minor. While that opening gesture clearly seized listener attention, I found myself more than a little disappointed that, as the three movements of the piece unfolded, there was less to sustain attention than I had previously thought.

Posted by Stephen Smoliar at 7:02 AM