Catching up with Wayne Shorter on Blue Note 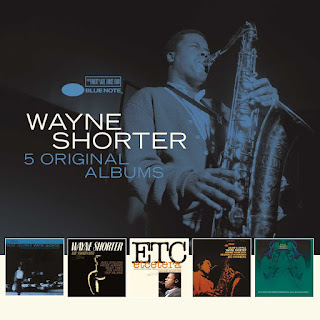 from the Amazon.com Web page for the collection being discussed

My awareness of saxophonist Wayne Shorter came relatively late in the history of my listening to recorded music. It resulted from my decision to keep up with the series of collections of recordings that trumpeter Miles Davis had made for Columbia. These included both of the “Great Quintet” performances (the first of which was sometimes expanded to a sextet). Shorter was the last musician that Davis recruited for his second quintet, following Herbie Hancock on piano, Ron Carter on bass, and Tony Williams on drums. Recordings of that quintet covered the period from 1964 to 1968.

Around the time that the “Second Great Quintet” anthology had been released, I was just beginning to build up a collection of Mosaic anthologies as a result of my getting on the mailing list for Blue Note Records. That led to my discovery of Shorter’s earliest albums on Vee-Jay Records: Introducing Wayne Shorter, Second Genesis, and Wayning Moments. Only later did I learn that, during his tenure with Davis, Shorter was also making albums for Blue Note. For a very long time, I knew of only one of those albums, Speak No Evil.

More recently I discovered that the “revived” Blue Note, led by President Don Was, was reissuing past recordings through a 5 Original Albums series.

My curiosity got the better of me, and I purchased the Wayne Shorter collection about a month ago. The span of content over the five albums is impressive. Here are the titles, dates, and personnel joining Shorter on tenor saxophone for each of them:

Shorter’s reputation was first firmly established during the late Fifties, when he was a member of The Jazz Messengers, led by drummer Art Blakey. During his tenure, he would become Blakey’s primary composer. After leaving the Messengers in the Sixties, he was able to draw upon past Messengers and present members of the Davis quintet to contribute to his Blue Note recording sessions. Almost all of the tracks in this collection are original compositions by Shorter. The only exceptions are single tracks on three of the albums composed by Gil Evans (on Etcetera), Jimmy Rowles (on Adam’s Apple), and James Spaulding (on Schizophrenia).

To say that all of this makes for rich listening experiences would be the height of understatement. Each of these albums deserves multiple listenings, and I am just beginning to get my head around an initial sampling of all of the tracks. Personally, I am more than merely glad that all five of these albums have been given a new lease on life.

My only cautionary observation is that serious listeners would do well to have a magnifying glass readily available. Each CD has its own sleeve. The original album cover is on the front of the sleeve, while the back provides information about the content. That information includes valuable commentary by writers such as Nat Hentoff, Blue Note Producer Michael Cuscuna, and Leonard Feather. However, trying to read all of that material may be hazardous to visual acuity if attempted without the assistance of a magnifier!

Posted by Stephen Smoliar at 8:15 AM