Early next month the Greek Chamber Music Project (GCMP) will present a program of two world premieres. The performance will be hosted by the San Francisco Conservatory of Music (SFCM), taking place in the Technology Hall, located in the new Bowes Center building. The major offering will be the first performance before an audience of “Talos Dreams,” composed by Costas Dafnis. Talos was a figure in Greek mythology that may have been the first imagined automaton. Talos was a bronze giant built to protect the Phoenician princess Europa from pirates and invaders. Thanks to his size, he could circle the entire island of Crete three times a day.

“Talos Dreams” is a 30-minute composition for a chamber ensemble. In the performance at SFCM, the composer will play an invented instrument called the ghostplate. This is a metallic instrument that Dafnis built and designed working with Tom Nunn, whose compositions call for performances on a wide variety of invented instruments. The other musicians will be flutist Ellie Falaris Ganelin, oboist Kyle Bruckmann, violinist Ariel Wang, and cellist Lewis Patzner. 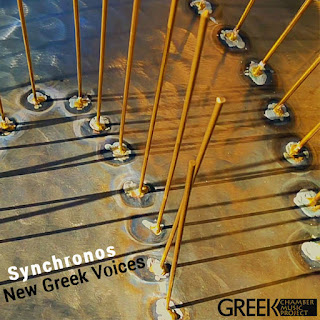 Album cover of Synchronos (from the Bandcamp Web page)

“Talos Dreams” was recorded earlier this year and was released for both streaming and download through a Bandcamp Web page. It is one of three compositions on the album Synchronos: New Greek Voices. The album also includes the debut recording of Four Greek Dances by Georgios Kasassoglou, along with the opening track “Words of Grief,” composed by Dinos Constantinides. Next month will mark the first time that “Talos Dreams” will be given a concert performance.

The second world premiere will be “Medea: Rebirth and Destruction.” In this case the music will involve an original collection of works for chamber ensemble and electronics created by SFCM composition students. Medea is probably best known for her tragic encounter with Jason. However, before she met Jason her powers as a sorceress were responsible for the fall of Talos.

This concert will begin at 7 p.m. on Wednesday, December 8. The performance will be accompanied by prerecorded commentary delivered by both Dafnis and Adrienne Mayor, who will discuss the role of technology in Ancient Greece. The Bowes Center is located at 200 Van Ness Avenue. There will be no charge for admission. However, a donation of $20 is suggested; and it will include the CD version of Synchronos. The performance will also be live-streamed and will be available for viewing through a YouTube Web page. [update added 11/16, 4:20 p.m.: An Eventbrite Web page has been created, which will process RSVPs for both attending the performance and the Bowes Center and viewing the live-stream. All donations may be processed through that same Web page.]

Posted by Stephen Smoliar at 12:45 PM